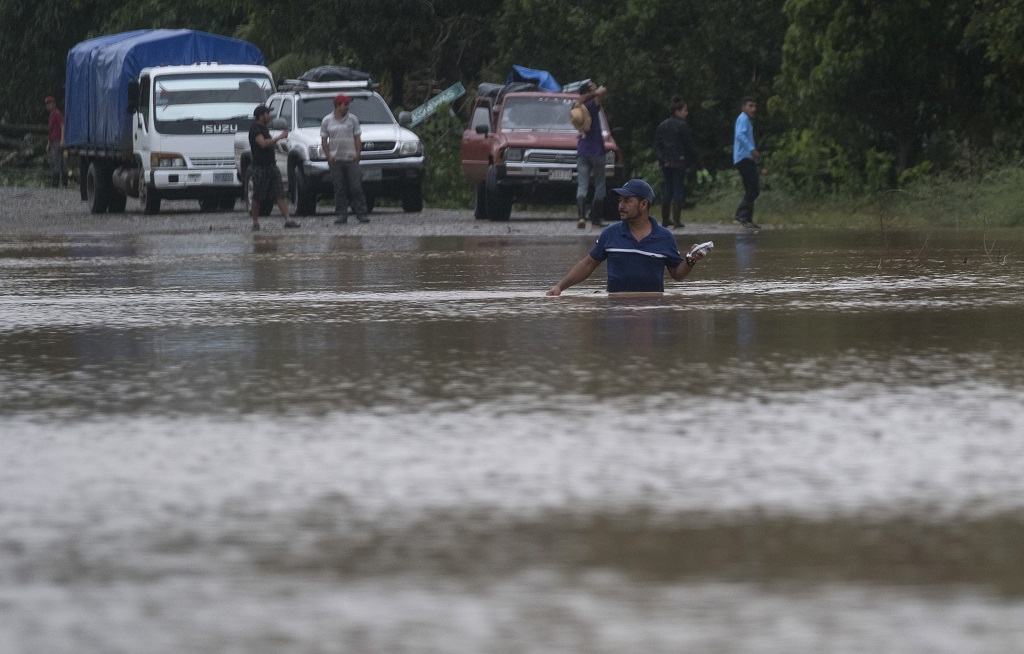 A man walks through a flooded road in Okonwas, Nicaragua, Wednesday, November 4, 2020. Eta weakened from the Category 4 hurricane to a tropical storm after lashing Nicaragua's Caribbean coast for much of Tuesday, its floodwaters isolating already remote communities and setting off deadly landslides. (AP Photo/Carlos Herrera)

Iota, the 30th named storm of the 2020 Atlantic Hurricane season formed in the Caribbean Sea Friday evening. Tropical Storm Iota is expected to rapidly strengthen over the weekend as it moves across the Caribbean. It could become a major hurricane when it approaches Central America.

The National Hurricane Center in Miami said Iota could bring dangerous wind, storm surge and as much as 30 inches (76 centimeters) of rainfall to the two Central American countries, approaching their coasts as early as Monday.

By early Saturday, the storm was located about 340 miles (545 kilometers) south-southeast of Kingston, Jamaica, and had maximum sustained winds of 40 mph (65 kph). There were no coastal warnings or watches in effect as of Saturday morning. Iota was moving to the west-southwest at 5 mph (7 kph).

Moderate northeasterly winds and seas are expected to continue across the Cayman area while radar images show isolated showers in and around the Cayman area as Iota heads towards Central America.

Iota could wreak more havoc in a region where people are still grappling with the aftermath of Eta. That system hit Nicaragua last week as a Category 4 hurricane, killing at least 120 people as torrential rains brought flash floods and landslides to parts of Central America and Mexico. Then it meandered across Cuba, the Florida Keys and around the Gulf of Mexico before slogging ashore again near Cedar Key, Florida, and dashing across Florida and the Carolinas.

The Tampa Bay area was buffeted with gusty winds and rain, and there was one US death linked to Eta: In Bradenton Beach, Mark Mixon stepped into his flooded garage as he was laying sandbags around his home Wednesday evening and was electrocuted, said Jacob Saur, director of public safety for Manatee County.

Iota is already a record-setting system, being the 30th named storm of this year's extraordinarily busy Atlantic hurricane season. Such activity has focused attention on climate change, which scientists say is causing wetter, stronger and more destructive storms.

Eta was the 28th named storm of this year's hurricane season, tying the 2005 record for named storms. Theta, the 29th, was weakening over the far eastern Atlantic Ocean. It was expected to become a remnant low later Saturday, forecasters said.

In Cayman, the outlook for the next few days is for a gradual increase in wind speeds and wave heights expected from Saturday evening, as TS Iota is expected to strengthen and move near Honduras.