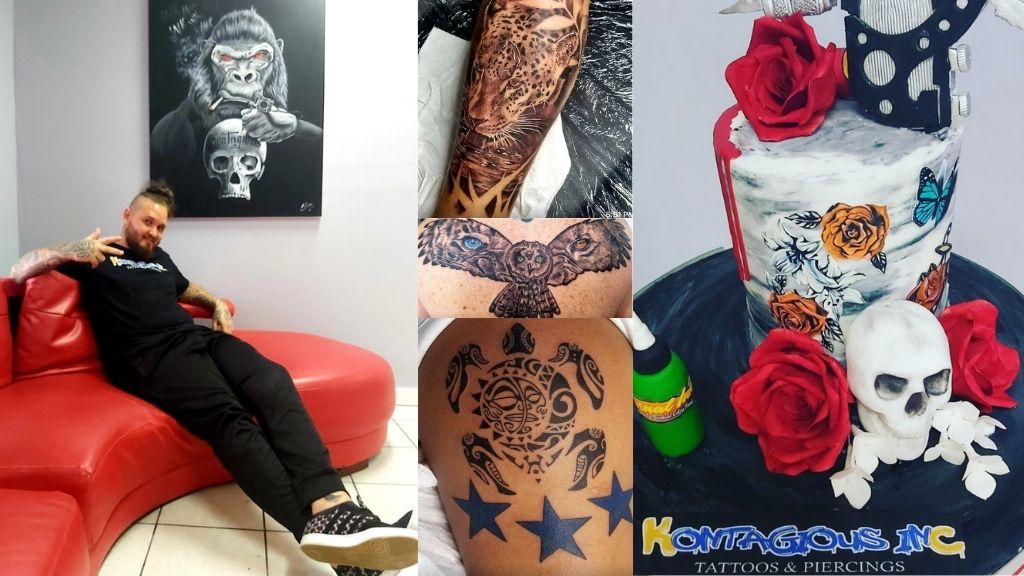 Whether you love them or hate them there is no denying that tattoos are a growing trend that is here to stay.  The growth of the tattoo industry in Cayman is no exception. With more and more people choosing to go under the “gun”, tattoos have become far more socially acceptable and tolerated in workplaces than ever before.  The level of talent in today’s body art market is at a peak with artists creating breathtaking and intricate pieces of skin art.

With a name that adequately depicts the impact of the local trend, Kontagious Inc., Cayman’s newest tattoo & piercing parlor officially opened its doors for business on Saturday. The grand opening featured steel pan artists Jimi La Pierre & Michael Le May who put on an incredible live performance in front of the store, located in Tropical Plaza on Smith Road.

Chang lives, breaths, sleeps and, if possible, would eat tattoos! He told Loop that he was delighted to get to eat one of the “tattoo” roses from the custom made tattoo cake, provided by the Cake Studio at the opening.  Chang's passion for his work is evident as Loop discussed the industry and his hopes for the new business.

Chang has already established himself with a growing client base as his passion for perfection in creating one of a kind flawless tattoos puts him in a league of his own.  He is also known for his creative cover up designs for clients who want to cover an existing tattoo or scar which he effortlessly manages to work into a new design to disguise what was there before.

In addition to tattoos and piercings, Kontagious Inc. also offers custom canvas artwork.  Some of Changs’ pieces are displayed throughout the parlor and clients are invited to order their own paintings and portraits.

To celebrate its official opening, Kontagious Inc. is offering a 10 per cent discount on tattoos for Loop Cayman readers who call in this week to book an appointment.

The chicest face masks in Cayman (and where to get them)