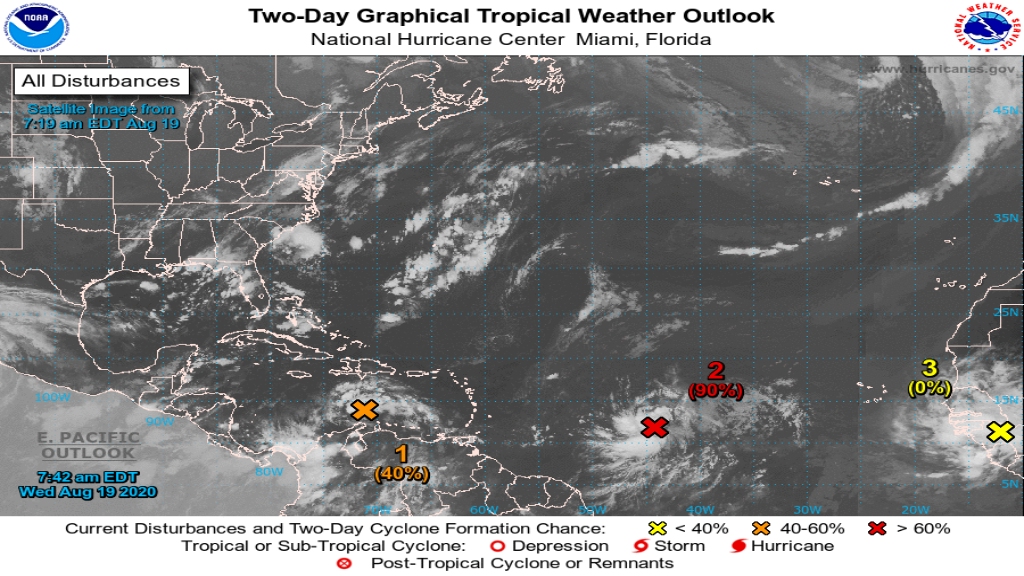 The US National Hurricane Centre (NHC) is monitoring three weather systems in the Atlantic basin which are showing signs for potential tropical cyclone activity.

The first is a tropical wave located over the eastern Caribbean Sea, producing disorganized showers and thunderstorms, along with gusty winds.

NHC said some gradual development of this system is possible during the next 24 hours as it moves westward at about 15 to 20 mph across the central Caribbean Sea.

The second is an elongated area of low pressure located a little more than 1000 miles east of the Windward Islands. It is producing a concentrated area of showers and thunderstorms mainly on the west side of the disturbance.

NHC said environmental conditions are conducive for further development and a tropical depression is expected to form during the next day or two while the system moves generally west-north-westward at 15 to 20 mph across the central and western portions of the tropical Atlantic. It has a high (90 percent) chance of formation during the next 48 hours and five days.

The third is a large area of showers and thunderstorms located over Guinea and Sierra-Leone, Africa, associated with a vigorous tropical wave. NHC forecast environmental conditions to be marginally conducive for some development of this system while the wave enters the extreme eastern Atlantic on Friday.

By early next week, however, conditions are forecast to become less favourable for tropical cyclone formation while it moves west-north-westward at 15 to 20 mph toward the central tropical Atlantic. It has a near zero chance of formation during the next 48 hours and low (20 percent) chance during the next five days.