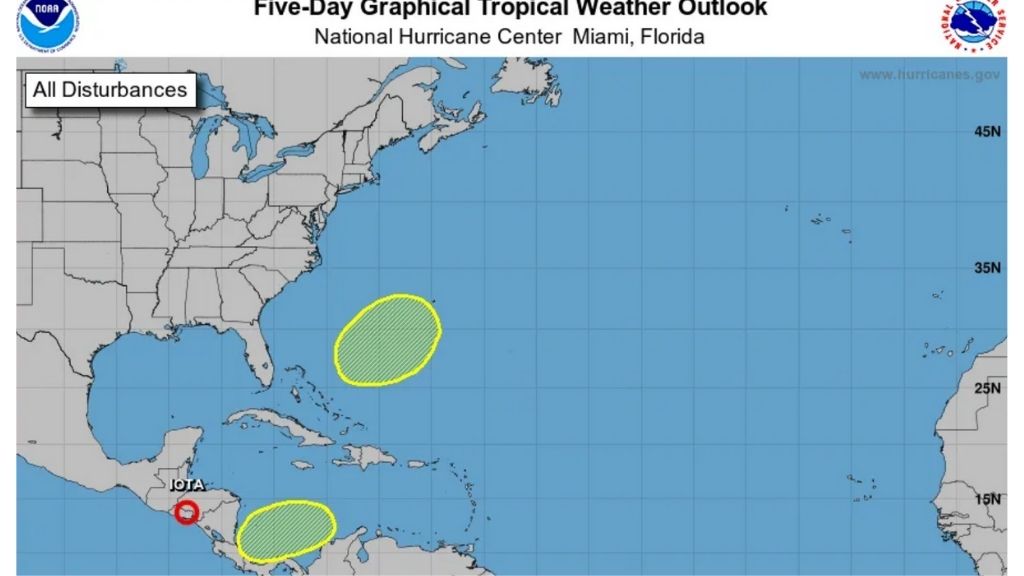 Today is an active weather day: There are two systems being watched by the National Hurricane Center-- one is in the Caribbean just south of where Hurricanes Eta and Iota made landfall in Nicaragua and the other is east of the Bahamas. Advisories have also been issued with regards to Tropical Depression Iota located inland over El Salvador. The Cayman Islands National Weather Service has issued a severe weather advisory for Cayman.

In the extreme southern Caribbean off the coast of Costa Rica and Panama, conditions appear marginally favorable for a system to organize. Meteorologists say that it will likely stay fairly far south and probably not get very strong. It would have very little time to organize before it moved across Central America late this week or over the weekend.

Regardless of tropical cyclone formation, areas of heavy rain are possible during the next several days from Nicaragua southward across Central America and into Colombia. These rains could cause new flooding concerns, especially across previously inundated areas. The formation chance through 5 days is about 20 per cent.

A non-tropical area of low pressure could form between the Bahamas and Bermuda by early next week. The system could gradually develop subtropical characteristics through the middle of next week while it moves northeastward.

According to meteorologists, if the non-tropical, nor’easter-type system develops, and it sits over the warm water for a day or two, it could become tropical enough to get a name. The formation chance through 5 days is about 20 per cent.

The next two letters in the Greek alphabet are Kappa and Lambda, if they are needed.

The center of what’s left of Hurricane Iota is dying out over El Salvador, but moisture continues to be pulled into the mountainous areas in Central America, especially in Nicaragua, Honduras, and Guatemala. The circulation at ground level has been ripped apart by the high terrain and is dying out. But the flash flooding at high elevations continues, and that water cascades down the mountains in the gullies, valleys, and rivers. With maximum sustained winds of 35 mph. Iota is moving west-southwest at 13 mph. This storm poses no immediate threat to the Cayman Islands.

A combination of the continued low pressure in the Caribbean, which is helping these storms develop, and the strong high-pressure system across the southeast US will make it a windy week.

Late last night, the Cayman Islands National Weather Service issued a severe weather advisory, stating that northeasterly winds and rough seas are expected over the Cayman area for the next few days, through to Friday, as a strong high pressure system builds over the southeast United States. US Radar images show isolated showers which are moving towards the west.

Today will bring partly cloudy to cloudy skies with a 40 per cent chance of showers and possible thunder. Temperatures will rise to the upper 80’s °F. Winds will be east to northeast 15 to 20 knots this morning becoming 20 to 25 knots with higher gusts by the afternoon. Seas will be rough with wave heights of 5 to 7 feet.

Tonight will bring partly cloudy to cloudy skies with a 40 per cent chance of showers. Temperatures will fall to the mid 70’s °F. Winds will be east to northeast 20 to 25 knots with higher gusts. Seas will be rough with wave heights of 7 to 9 feet.

Gusty conditions are expected in the Cayman Islands for the next few days.