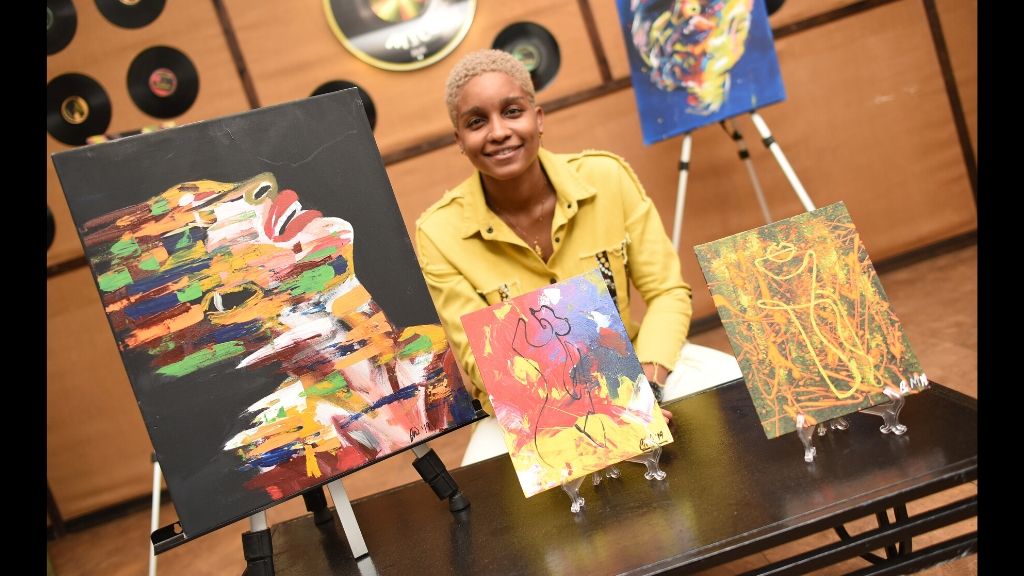 Model/painter Gabrielle Murdock made a debut at the 2019 Art Wednesdays series inside the Melhado Room at the Reggae Mill Bar in Kingston recently.

Though the self-trained artist recalls an involvement with the arts from a much younger age, she only started sketching less than three years ago.

Why art? “It’s more forgiving…I feel a lot [and what I feel] constantly changes…I’m always looking for more and what I want to depict changes a lot,” she told Loop Lifestyle.

loopcayman Swipe to see artwork from the exhibition

In high school, Murdock dabbled with charcoal and chalk pastels but mentioned that her skills developed later with YouTube tutorials.

Her preferred medium… “Acrylic on canvas, and sometimes oil”

With works like Bantu Queen and Untitled, Murdock believes some of her best works explore the black female form.

Indeed, Bantu Queen – a painting representing a black girl with Bantu knots – was a labour of love “for sentimental reasons”. It was Murdock’s first attempt at realism that, coincidentally took the longest to complete.

“I am emotional and sporadic...indecisive, but also sure. I am sure of who I’m not, but still figuring out who I am. I am a creative and an athletic person, and I think I’m a jack of all trades. I’m in love with all the art forms.”

There was an obvious similarity with the paintings on display. All the models had faces with no eyes.

This was intentional, Murdock asserted, stated that “…in portraying the female form, I want other women – and men – to see themselves in my art”.

#NoCommission Art Wednesdays is a passion project of record producer/restaurateur Alexx Antaeus, which started in 2017. It was inspired by the #NoCommission exhibition series conceptualised by spirits brand Bacardi and American music producer Swizz Beatz.

“I was influenced by Swizz Beats, who has done this on a much larger scale in the US. I thought 'let me have a smaller version of that here in Jamaica to promote the arts, Jamaican art, local artists, give them a platform to exhibit their work and also earn a living',” he said.

Since 2017, Art Wednesdays has spotlighted photographers, sculptors, painters among other creatives.

And, Antaeus is particular about the format of the series, there are currently no plans to expand or feature other artisans.

For quality control, the success of #NoCommission rests on a committee comprising art enthusiasts and music industry insiders.

“We don't look at whether the artist is famous or not, we base it strictly on their work. When creatives send in samples of their work along with a bio and the committee feels like their work deserves to be exhibited, we call you. It's that simple!” Antaeus explained.

Because of his love for the arts, nearly 40 paintings from artists who’ve exhibited at Art Wednesdays deck the halls of the Reggae Mill Restaurant, OPA! Greek Restaurant and Reggae Mill Bar - restaurants co-owned by Antaeus.

In January, Murdock can add actor to her accomplishments as she recently confirmed an acting role in a Rock-made production dubbed Traytown.

In a nutshell, the story centres around a newly-wed female politician, who’s running for office and happens to fall in love with a journalist from the inner-city.

After months of searching for an actor to fill the role, writer Letay Williams and producer/co-director Nadean Rawlins agreed on Murdock playing the supporting actress.

When asked about her involvement in the different mediums, Murdock simply responded: “I’m just saying yes [a lot more]”.