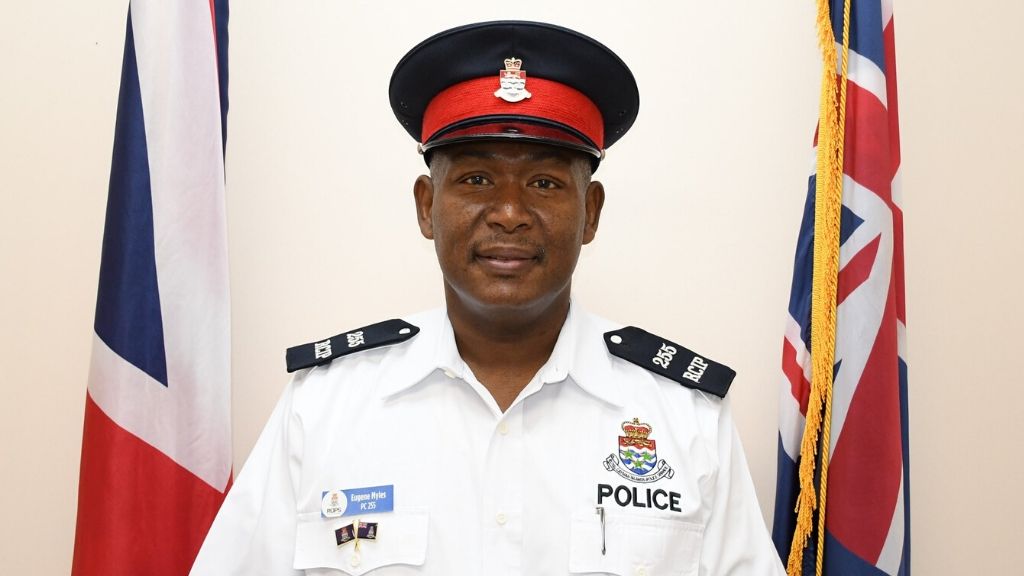 “Life should always be about being a part of something bigger than yourself. The greater good of society rests on the ability to maintain harmony and making sure that all human beings are afforded the opportunity to not only survive but to thrive. That is why I chose to become a Police Officer, and why I’m still a Police Officer so many years later.”

These are the words of PC Eugene Myles, who is celebrating 32 years of service to the Royal Cayman Islands Police Service.

PC Myles, who has been the Community Police Officer for Beat 11 in the district of West Bay, from which he also hails, for the past five years has also worked across all three islands in a number of different capacities throughout his career as a police officer. He was worked in both Cayman Brac and Little Cayman, as well as in the former Traffic Department, the former Marine Section, the Criminal Investigations Department, the former Drug Squad, the former Crime Reduction Unit, the former Burglary Task Force and the Joint Marine Unit.

When asked about his fondest memories in the years he has been an officer, PC Myles said, “My fondest memory is being a part of a crime fighting team and being able to secure several convictions. I was drafted to this team in my earlier years on the job. Learning the ropes of the job while getting bad guys off the streets and making neighbourhoods feel safer was a very special feeling.”

“PC Eugene Myles is very hardworking and resourceful,” says Inspector Courtney Myles in charge of the Community Policing Department. “He is very dedicated and humble, and the people of West Bay love him and depend on him. I am happy to have him as part of my team.”

“I can always count on PC Eugene Myles to go above and beyond whenever I need him,” says Inspector Lloyd Marriott, the area commander for the West Bay District. “He carries out his duty as a beat officer in West Bay with genuine care and integrity. Not only does that say a lot about PC Myles as an officer but also as a person.”

“PC Myles is the consummate police officer, with his extensive years serving in a range of operational areas, policing at sea, land, and, more recently, as a Community Policing Officer in the district of his birth and residence,” said Deputy Commissioner of Police Anthony Ennis. “I’m therefore delighted in joining the Commissioner of Police, the Senior Command Leadership Team and fellow colleagues in congratulating him on this milestone and thanking him for his selfless service and contributions in keeping our communities safe and improving quality-of-life concerns.”

Police officer contributes to the Cayman community with art & service