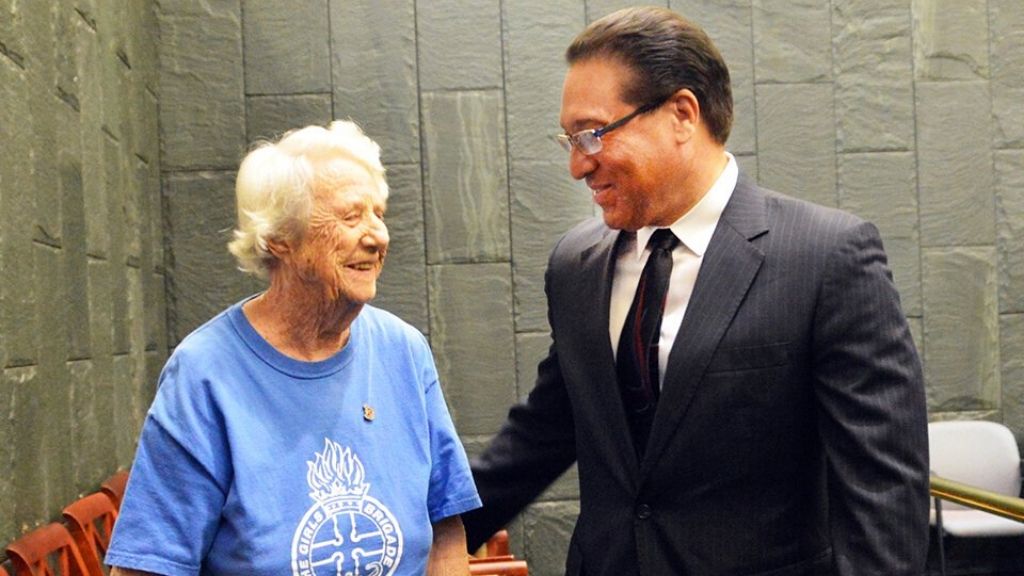 "Today we're mourning the loss of one of our great stalwarts, Mrs Olive Miller, OBE, MBE, Cert Hon, JP. She contributed so much to our islands and was passionate about Cayman, she will be sorely missed. May she rest in peace in the arms of our Lord," said Premier Alden McLaughlin in a Twitter post this morning, commemorating the late Olive Hilda Miller who passed away yesterday, May 19 at the age of 98.

Olive Hilda Miller was born in Essex, England on November 9, 1921.  As a young lady she came to the Caribbean to establish her roots, and – as it turned out – to develop a lifetime of service to others.

At the early stages of her career in England, she was a youth organizer, and in 1946 sailed to Jamaica as a missionary youth worker for the Church of Scotland. During this time she also worked in Grand Cayman, visiting six weeks at a time.

Mrs Miller answered the local Presbyterian Church’s request for a mission worker, and in 1949, she became a teacher at the new Cayman High School.  On the weekends she worked with district churches.

She met the late Mr Ray Miller of North Side and they married in 1953 in England.  The couple later returned to Grand Cayman in 1957 with their young daughter Katherine.  Their son Nigel would be born in Grand Cayman.

While in England Mrs Miller maintained her interest in youth work, serving as the Girls Guildry organiser.   On her return to Cayman, she took up work with the local Girls Guildry that she had founded in 1946.  This movement became the Girls Brigade in 1965 and influenced hundreds of local girls.   From 1983 to the present Mrs Miller served as Vice-Patron of Brigade International.  She was awarded the Queen’s Badge and Certificate of Honour in 1967 for this work.

In the mid-1960’s she helped Mr Billy Bodden establish the country’s first newspaper, Trade Winds.  Later, she helped him found its successor, The Caymanian.  This experience made her a natural choice in 1971 to be the first Government Information Officer.

In 1982, Mrs Miller was seconded as a government Youth and Community Service Worker with the then National Council of Social Services, now known as the National Council of Voluntary Organizations.  During her tenure with this organization, she helped organize programmes and facilities such as the Pines Retirement Home, Pines Villas, Caring Cousin Scheme, and the Nadine Andreas Children’s Centre.  Upon her passing, Mrs Miller served on the NCVO Executive Committee, as a Pines Retirement Home Director, and as Deputy Chairman of the Children’s Services Board.

Since 1978, Mrs Miller served as Justice of the Peace, serving in Juvenile Court and as Chairman of the Bench. Also in the 1970s, she organised annual International Nights, to encourage harmony between the people of different cultures living in Cayman.   In 1980 she founded the Pink Ladies Volunteer Corps for the George Town Hospital.  As a grandmother and great-grandmother, she organized the first annual Glamorous Granny competition in 1994.

Mrs Olive Miller was an outstanding example of female leadership and initiative.  She was rewarded in 1977 with a Member of the British Empire (MBE) medal.   In April of 2003, she was the only living recipient of the Quincentennial Distinguished Woman Award. Her contributions were again recognised by Her Majesty Queen Elizabeth II in 2018 when she received the Order of the British Empire (OBE) medal.

Throughout today, May 20, the Cayman Islands National Flag will be flown at half-mast at all Government buildings to honour Caymanian cultural icon, Olive Miller, OBE, Cert Hon, JP.

The Government of the Cayman Islands took this decision, which will also apply on the entire day of Mrs Miller’s funeral (on a date to be announced).

May she rest in peace.

David Gooding, "An Officer and a Gentleman" has passed away

Andreas Ugland, founder of the CI Motor Museum has passed away