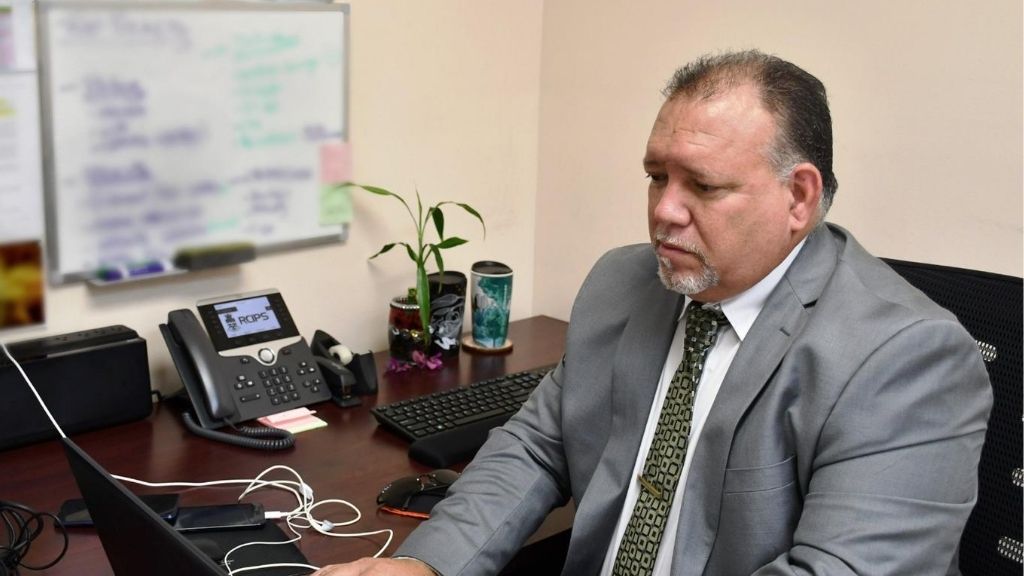 Senior Detective Constable Greg Banks is celebrating his 34th year anniversary with the Royal Cayman Islands Police Service. SDC Banks became a police officer back in August 1986 because he had a passion for helping people, especially children and youth. He explained that it was always important for him to be involved in the development of the community, and policing provided him with an avenue to do so. It also provided him with the opportunity to contribute to the development of the young people of the Cayman Islands and help them to better understand right from wrong.

Over the years, SDC Banks has worked in various departments and carried out a number of different tasks. He has worked as a uniformed officer with the Bodden Town Police Station and George Town Police Station. He has also even driven the Governor for a short period. From there he began his career as a detective constable by working in the Criminal Investigations Department, the former Joint Marine Unit, and the former Drugs Task Force. SDC Banks was also one of our first Tactical Flight Officers with the Air Operations Unit, when the first police helicopter became operational.

“My fondest memories include working in the Joint Marine Unit where I was involved in a dispatch to rescue people who were caught in a Northeaster storm,” says SDC Banks. “We were searching for a sailboat that was damaged by the storm and had a broken mast. We were able to locate the boat and tow the sailors safely to shore. It was very satisfying and gratifying to me to know that I assisted with the task of saving lives.”

Currently, SDC Banks is a Senior Detective Constable who carries out major investigations throughout the Cayman Islands.

“It has been my pleasure to serve alongside SDC Banks over the years,” says Detective Inspector Wade Chase, Inspector in charge of the Investigation Team that SDC Banks currently operates from. “Although I supervise SDC Banks, I have great respect for the wealth of knowledge and experience, as well as the point of view that he brings to the team. On behalf of my team, I congratulate SDC Banks on his work anniversary and we look forward to working with him in the years to come.”

When asked why he stayed with the RCIPS for so long, SDC Banks had this to say: “I absolutely love my job. I enjoy the diversity and knowing that not one day is the same. Most importantly, I enjoy helping my fellow Caymanians as well as all the residents of these islands feel safe to go about their days as usual, knowing that they are protected.”

“On behalf of the Senior Command Team, I would like to thank SDC Greg Banks for the years of service that he has dedicated to the RCIPS, and in turn, to the Cayman Islands,” says Deputy Commissioner of Police Kurt Walton. “SDC Banks, it has been a great honour to work beside you as well as to oversee the work that you have put in over the years. Your background and the solid foundation that you have gained within the service, now provide you with the perspective and investigatory skillset that gives the RCIPS an edge in carrying out investigations and protecting the Cayman Islands from crime. This allows you to be the perfect mentor for young and aspiring detectives who are looking to leave their mark as you have done. Please continue the good work that you have been doing for well over 30 years.”

CUC celebrates twenty staff for 20 to 40 years of service