Significant increase in bees and concern of bee aggression in Cayman 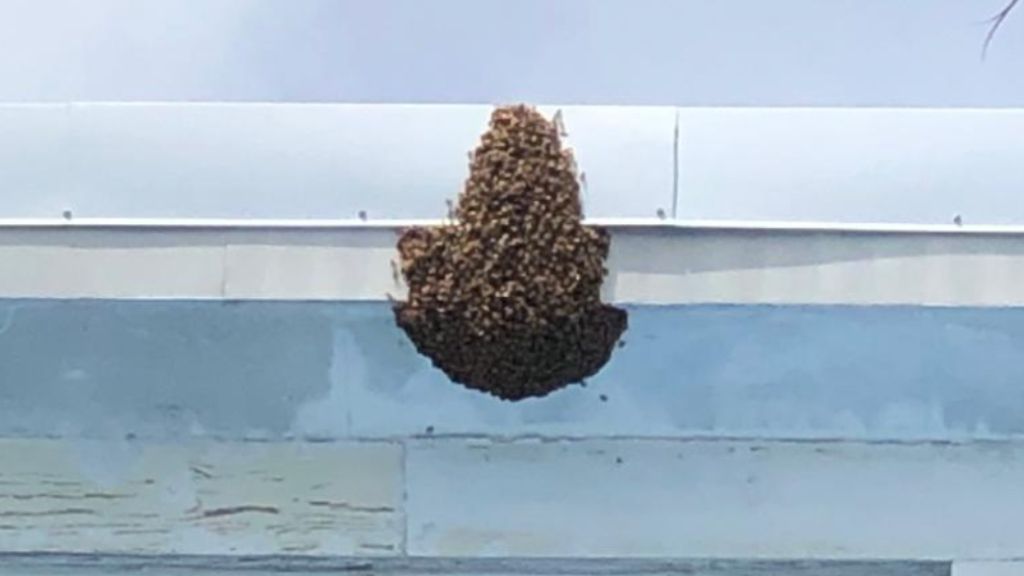 There has been a marked increase in the volume of bees observed in Cayman this year, and some residents have voiced concerns about an increase in bee aggression on-island.

Kent Strad, of Strad’s Raw Cayman Honey, a beekeeper and first responder when local hives need to be relocated, has confirmed that there has been a significant upsurge in the number of removals that he has had to do this year.

“The volume of bees has increased,” he confirms.

Members of the police force, the Department of Agriculture and other beekeepers have also observed significantly greater quantities of bees.

“Over the past week, we’ve had a few reports of incidents involving bees,” describes Inspector Courtney Myles, Head of Community Policing. “There were two instances on Crewe Road where we were able to work with the DOA to contact beekeepers to come out and relocate the bees safely.”

On June 10, RCIPS Community Police Officers and officers from the Department of Agriculture visited an area on Shedden Road in response to reports from members of the public who had encounters with bees swarming in the area.  The bees were removed and relocated.

Beekeeper, Geoffrey Dixon agrees, “The number of bees has been growing lately. Over the past 3 months, my bees have increased by over ten hives.”

“Swarms of bees are becoming more common as we move into the summer months,” explains Tiffany Chisholm of the Department of Agriculture.

“In April and May the population starts to grow and it will increase further with the nectar flow. It should taper off by July when the volume of nectar reduces,” indicates Mr Strad. “Another possible reason for the more significant volume this year is that sporadic showers, and limited heavy rain, made the vegetation grow in stages, which was healthier for the bees.”

Experts confirm that although there has been an increase in the numbers of bees, the swarms do not appear to be more aggressive than in previous years.

“Generally these swarms have left a hive and are searching for an area to establish a new one in,” says Ms Chisholm. “They will pose no threat unless attacked or threatened and can safely be observed from a distance. However, if the swarm remains in one location for more than 2 to 3 days or is in a heavily trafficked area, members of the public are advised to contact a beekeeper to facilitate safe removal and relocation of the bees.”

“People’s perception of aggression is dependent on their reaction to bees,” advises Mr Strad, who does not believe that the recent drought conditions have affected the temperament of local bees.

“Yardwork, loud noises like weed trimmers and lawnmowers, and chemical sprays can make bees agitated,” he explains. “One will know if a bee is aggressive by its buzz. Calm bees have a calm, consistent buzz and an angry bee is like a dirt bike.”

Those who are fearful of bees should not wear strong perfumes, as scents will attract bees. It is also important to remain calm.

Another cause of bee aggression is a perceived habitat threat.

Mr Dixon describes two such instances in Cayman. The first of these involved his father four years ago when he was chopping some bushes close to a fence in a bushy area. He did not see the bees because they were living in a hole in the ground. The attack was so severe that he had to be rushed to the hospital where he was placed in intensive care.

Another case involved a farmer who was clearing land with a bulldozer in Lower Valley last year.

“The bush was scattered and only about 2 to 5 feet tall and on rocky land with lots of cracks below the ground. He disturbed the bees without knowing it and they attacked with a vengeance,” he recalls.

It is important to note that bees are not innately aggressive creatures and a beehive is not typically hostile but can become agitated for a myriad of reasons.

Members of the public are advised not to attempt to scare or threaten bees with water or sprays, which could be potentially dangerous, but to contact the Department of Agriculture, a local beekeeper (Kent Strad: 324-1500), their local Community Police Officer or Community Safety Officer for assistance.

Give bees some love by growing these plants in your garden