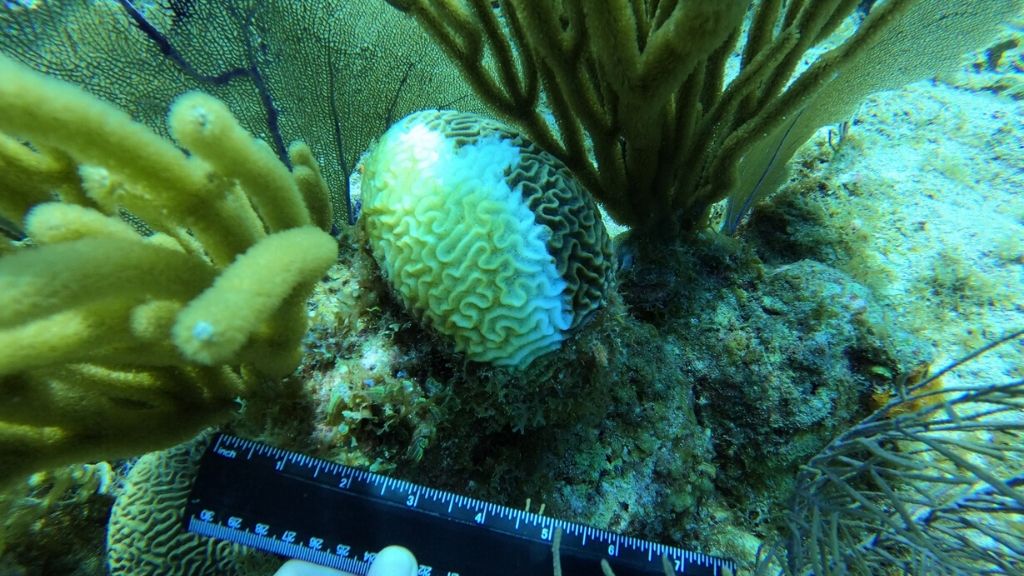 Global Coral Reef week is being celebrated until the 14th of this month, and on the top of many reef lovers' minds is the Stony Coral Tissue Loss Disease (SCTLD) that has been spreading throughout the region. SCTLD was first observed on the North Coast of Grand Cayman late last month.

SCTLD was observed in Grand Cayman for the first time at the North Coast of Grand Cayman on June 21st 2020, prompting a disease report by Tom Byrnes of the Cayman Marine Lab.

A site visit was made on June 26 by DoE's Marine Resource Unit (MRU), but according to the Department of the Environment, without a known pathogen, it is impossible to confirm any diagnosis; however, the species, symptoms and rapid mortality rates resemble those seen in Florida and other Caribbean countries (Precht et al., 2016).

SCTLD first appeared on Florida’s Reefs in 2014 and has since spread to more than 90 per cent of the states' reefs, as well as to several countries in the Caribbean. Researchers at the Perry Institute of Marine Science confirmed finding the disease three months prior off of Grand Bahama island and it was first spotted on reefs around St. Thomas in January 2019.

On some reefs, the mortality rate has been between 60 and 100 per cent.

New research on stony coral tissue loss disease reveals similar “bacterial signatures” among sick corals and nearby water and sediments for the first time. Results hint at how this deadly disease might spread, and which bacteria are associated with it, on Florida’s Coral Reef.

According to the Cayman Islands DoE, SCTLD is known to affect more than 20 species of stony corals including primary reef building species: pillar coral (Dendrogyra cylindrus), elliptical star coral (Dichocoenia stokesii) and maze coral (Meandrina meandrites), brain corals and the smooth flower coral (Eusmilia fastigiata). Once a coral is infected it begins to lose live tissue and it is likely that the colony will die within weeks to months.

SCTLD resembles other “white diseases” such as White Plague Disease but can be distinguished by white patches occurring in different areas of the same colony, rapid death of live tissue and the amount of individual colonies infected on a dive site.

The DoE advises that divers & snorkelers can do the following to reduce their likelihood of transferring SCTLD and help to slow its spread which gives reefs more time to adapt: practice proper buoyancy when diving, avoid touching marine organisms and sanitize equipment between dives and after each dive excursion (especially between infected & uninfected locations)

International scientists are monitoring the disease outbreak, identifying the pathogen(s) and developing treatments.

The DoE is currently monitoring the spread of SCTLD in the Cayman Islands and is developing a rapid response strategy. It has asked all divers to report any suspicious sightings directly to Tammi.Warrender@gov.ky.

Bleaching on Great Barrier Reef more widespread than ever