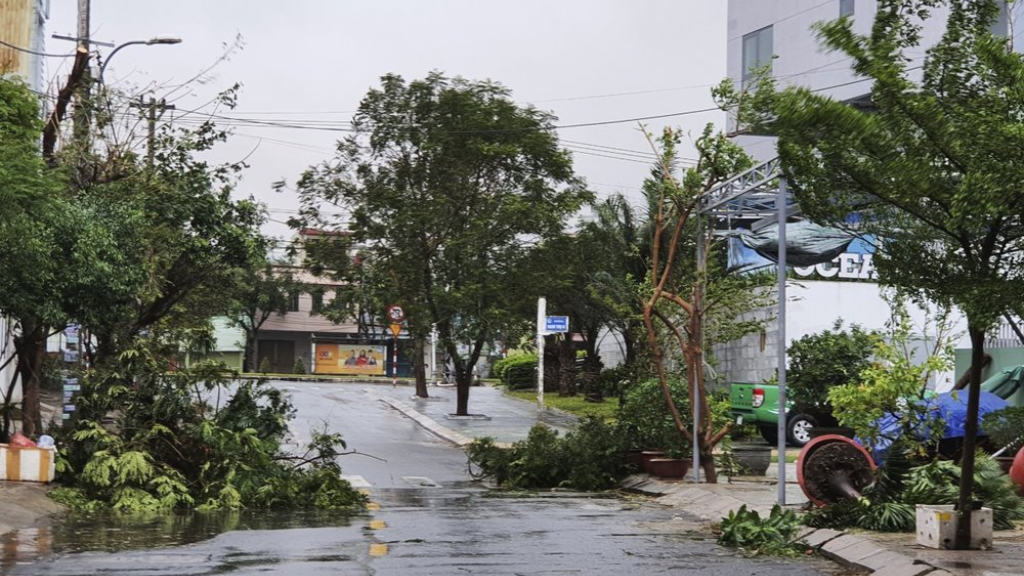 Typhoon Molave slammed into Vietnam with destructive force Wednesday, killing at least two people and sinking two fishing boats with 26 crew members in what was feared to be the most powerful storm to hit the country in 20 years.

Winds of up to 150 kilometres (93 miles) per hour killed a man by knocking him off his roof as he was trying to reinforce it in south-central Quang Ngai province. Another man was pinned to death by a fallen tree in the coastal province, the official Vietnam News Agency reported.

The navy deployed two rescue boats to search for the 26 fishermen off Binh Dinh province, according to state-run VTV network. It was not immediately clear if anyone was saved in the storm-tossed waters.

TV footage showed ferocious wind rattling roofs and toppling trees in Quang Ngai. In the nearby coastal province of Phu Yen, key roads were littered by fallen electric posts, trees and billboards, and the wind ripped off roofs from many houses and ravaged fish farms.

At least 40,000 people were evacuated to emergency shelters farther inland from coastal villages.

VTV showed displaced villagers huddled in classrooms that were converted into an evacuation centre, where they spent the night.

Provincial authorities shut down offices, factories and schools and asked people to remain indoors to prevent casualties. Vietnam is still recovering from severe flooding and landslides that killed 136 people and left dozens missing in three provinces.

More than 310,000 houses were damaged or destroyed in recent floods, leaving more than a million people in severe danger and in need of shelter, food, sanitation and safe drinking water even before the typhoon hit Vietnam, the International Federation of Red Cross and Red Crescent Societies said.

"The people of Vietnam are tough, yet this is among the worst destruction ever seen in many areas. The relentless storms and flooding are taking a devastating human toll," Vietnam Red Cross Society president Nguyen Thi Xuan Thu said in a statement.

"All our hard work in containing the social and economic fallout of COVID-19 is being undone by these massive storms hitting us one after the other," she said.

At least five airports were closed as the typhoon approached Wednesday, with more than 200 flights cancelled. Train services were also suspended Wednesday and will resume when the weather improves, the VTV network reported.

The typhoon left at least nine people dead in the Philippines before blowing toward Vietnam. Most of the thousands who took shelter during the storm have returned home, leaving those whose homes were destroyed remaining in evacuation camps.

13 missing, thousands displaced after typhoon in the Philippines