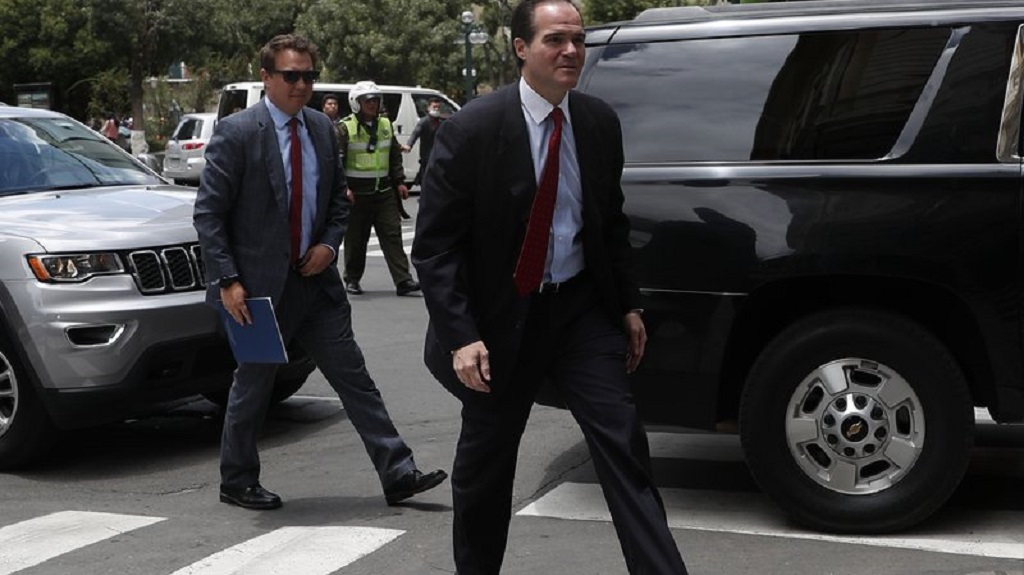 The Trump administration said Tuesday it plans to nominate the top White House official for Latin America to lead the Inter-American Development Bank, aiming to break a six-decade tradition of choosing the bank's leadership from candidates in that region.

The Treasury Department said Mauricio Claver-Carone could provide unique leadership that will help Latin America and the Caribbean overcome the fallout from the coronavirus pandemic, which threatens to plunge the region into one of its worst economic crises in decades.

"The IDB is at a critical juncture as the region faces growing challenges to economic growth and sustainable development, particularly in light of the global pandemic," Treasury Secretary Steven Mnuchin said in a statement.

Since its founding in 1959, the Washington-based development bank has always been led by someone from Latin America.

The current head, Colombia's Luis Alberto Moreno, is preparing to step down after 15 years following elections for his replacement scheduled for September.

In an interview, Claver-Carone, a Cuban-American attorney, said that in recent weeks, several presidents and officials in the region with whom he is in daily contact urged him to take the exceptional step of running for the bank's top job because they want the US to help mobilize capital and investment so the region recovers swiftly from the coronavirus pandemic.

"The number one complaint forever with IDB is that the US didn't care enough about the IDB, that the US doesn't pay attention," he said. "In the Trump administration we're changing that."

If elected, Claver-Carone said he would serve a single five-year term. He also vowed to reform the bank to impose term limits for all future presidents to reflect the region's own evolving democratic norms.

"One tradition people don't talk about is that for 60 years there have been only four presidents," he said. "These 15-, 20-year presidencies have to end."

As the bank's biggest shareholder, the US has traditionally led from behind, with a de facto veto over major decisions and a reserved seat for an American as the bank's powerful executive vice president.

The administration of President Donald Trump quietly put forward Claver-Carone for the bank's No. 2 job early this year but his name was rejected by Moreno, who saw his sometimes hard-line policies at odds with the bank's development mission, said a person familiar with the situation. The person agreed to talk about the situation on condition of anonymity because of the political sensitivities surrounding the US nomination.

A former bank official, who also insisted on anonymity, said, "The question is: Will Brazil, Mexico and Argentina roll over for Trump?"

While nobody has been formally nominated yet to succeed Moreno, several governments have informally floated candidates including former Costa Rican President Laura Chinchilla and Argentina's Gustavo Belíz.

Claver-Carone said he decided to run with the backing of Brazilian President Jair Bolsonaro, the staunchest Trump ally in the region. He said more than a dozen other countries have privately pledged their support although so far only Ecuador has done so publicly.

Backing from Brazil would give Claver-Carone candidacy a big boost. Voting is proportional based on each of the 48 member countries' shareholding power.

The US has 30 percent of the votes and would need the support of 15 of the 26 borrowing countries.

Claver-Carone previously served as the US executive director for the International Monetary Fund and also held a senior position at the Treasury Department. At the White House since 2018, he also spearheaded a program, Growth in the Americas, to support economic development in energy and infrastructure projects across the region.

He says he feels best known for "taking on bad guys." Foremost among them is Maduro, who the US has been seeking unsuccessfully to remove for 17 months through sanctions, criminal indictments and the recognition of Juan Guaidó the head of the opposition-controlled congress, as Venezuela's rightful leader.

Last year, Claver-Carone played a key role in getting the bank to cancel its annual meeting in China after Beijing refused to allow a Guaidó representative to attend.