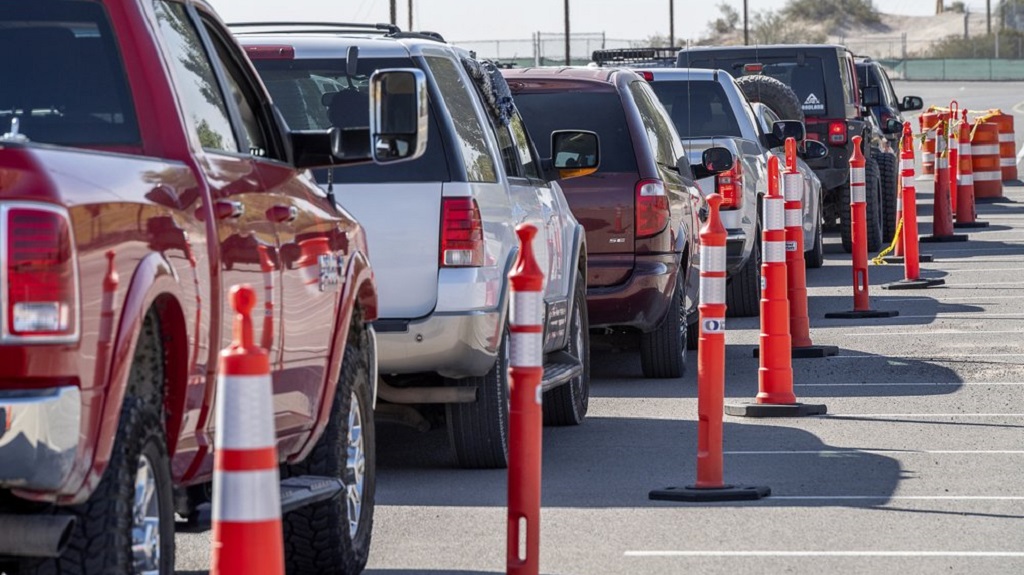 FILE - In this Oct. 14, 2020, file photo, vehicles are lined up for drive-thru COVID-19 testing in El Paso, Texas. As the coronavirus pandemic surges across the nation and infections and hospitalizations rise, medical administrators are scrambling to find enough nursing help — especially in rural areas and at small hospitals. (Aaron E. Martinez/The El Paso Times via AP, File)

Texas has become the first US state with more than 1 million confirmed COVID-19 cases as the nation continues to face a surge of infections, according to data from Johns Hopkins University early Wednesday.

The nation's second-most populous state has recorded 1,010,364 coronavirus cases with 19,337 deaths since the pandemic began in early March, according to the count on the Johns Hopkins website.

Texas had recently surpassed California, the most populous state, in recording the highest number of positive coronavirus tests. The true number of infections is likely higher because many people haven't been tested, and studies suggest people can be infected and not feel sick.

There were 94 new deaths Tuesday, according to the Texas Department of State Health Services.

Meanwhile, cases of the coronavirus that causes COVID-19 are surging in the Laredo area as the borderlands remained a COVID-19 hotbed Tuesday, health officials said.

Laredo health officials reported 331 new cases Tuesday of the coronavirus, the most since the August 10 peak of 374 cases.

That brought the area's case count for the pandemic since the beginning of March to 16,558. Of those, 934 cases are active, the most in two months, and 73 require hospitalization. One new death was reported Tuesday, bringing the city's COVID-19 death toll to 367.

The surge comes as El Paso, another border city, grapples with a recent tsunami of cases. Another 1,292 cases were reported in El Paso County on Tuesday, bringing its pandemic count to 65,651 with 27,895 cases now active and 1,076 requiring hospitalization. Nine new deaths brought the county's COVID-19 death toll to 682.

The higher counts come amid intensive testing in both places and statewide.