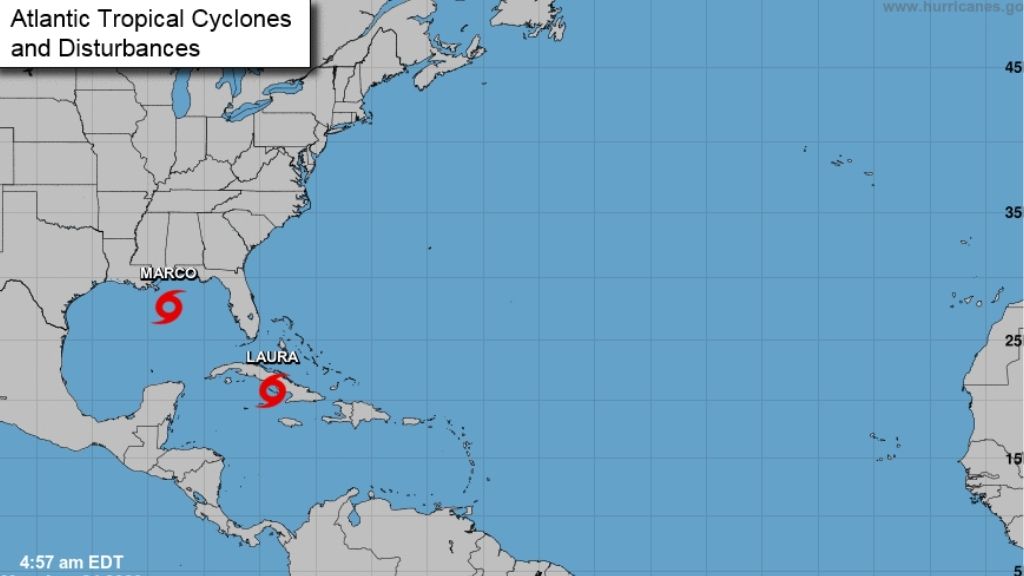 Tropical Storm Laura is gaining in strength and right in the vicinity of the Cayman Islands.

According to the NHC, the tropical storm is expected to strengthen into a hurricane by early Tuesday before moving into the Gulf States.

The following information was provided by the NHC at its 5 am update.

Tropical storm conditions are expected to spread westward within the warning area in Cuba through today.

Tropical storm conditions are expected in Little Cayman and Cayman Brac by this afternoon.

Tropical storm conditions are also expected within the warning area in the Florida middle and Lower Keys and the Dry Tortugas this afternoon and continuing into tonight.

Maximum sustained winds are near 65 mph (100 km/h) with higher gusts. Tropical-storm-force winds extend outward up to 175 miles (280 km) from the center.

Laura is expected to produce the following storm total rainfall accumulations through Tuesday:

Jamaica and Cuba: 4 to 8 inches, with maximum amounts of 12 inches.

Florida Keys, Turks and Caicos Islands, and the Northwest Bahamas: 1 to 2 inches.

Across the Greater Antilles this heavy rainfall could lead to life-threatening flash and urban flooding, and the potential for mudslides.

From late Wednesday into Friday, Laura is expected to produce rainfall of 5 to 10 inches, with isolated maximum amounts of 15
inches across portions of the west-central U.S. Gulf Coast near the Texas and Louisiana border north into portions of the lower
Mississippi Valley.  This rainfall could cause widespread flash and urban flooding, small streams to overflow their banks, and the
possibility of some minor river flooding across this region.

Swells generated by Laura are affecting portions of Hispaniola, eastern Cuba, the southeastern Bahamas and the Turks and Caicos Islands.  These swells are expected to spread across central and western Cuba, the central and northwestern Bahamas, and the Florida Keys today. Please consult products from your local weather office.

Meanwhile Marco has weakened back to a tropical storm and is approaching Louisiana.

The National Weather Service, in its 10 pm update last night, on the impact of the storm on Grand Cayman, advised as follows:

Tropical Storm Laura bearing down on The Bahamas, Turks & Caicos