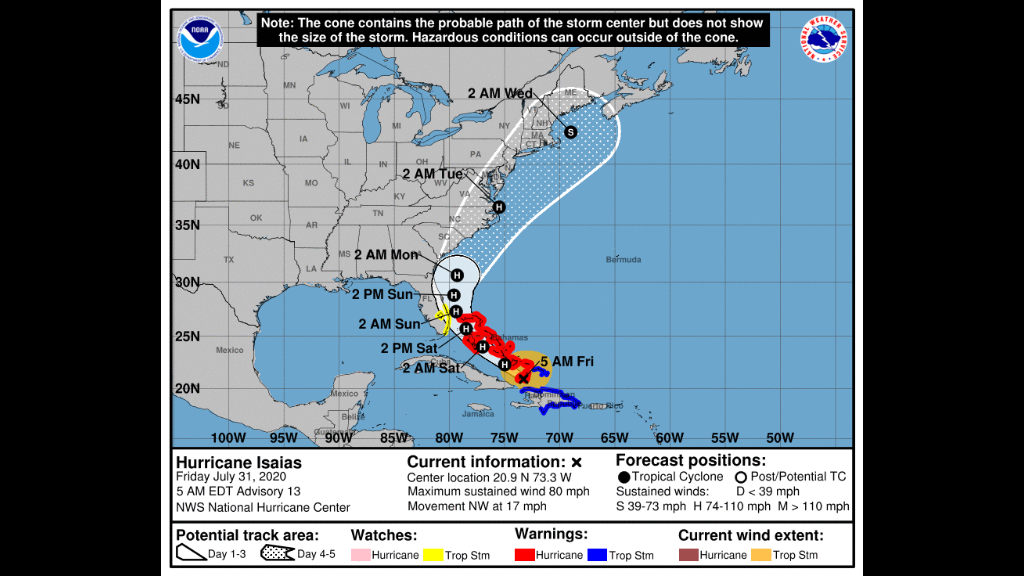 A hurricane warning is in effect for the Bahamas as Hurricane Isaias makes its way towards North America.

Isaias continues to produce heavy rain across the Dominican Republic, Northern Haiti and Turks and Caicos Islands and the US National Hurricane Centre (NHC) is warning that the system can produce “life-threatening flash floods and mudslides.”

In its 5am update, the NHC said tropical storm conditions will continue for the three countries into the early part of today.

The centre of Hurricane Isaias was located about 15 miles (25 km) south-southwest of the southern Bahamas.

Isaias is forecast to be near the Central Bahamas tonight and move near or over the North-western Bahamas and near or east of the Florida peninsula on Saturday and Sunday.

Maximum sustained winds are near 80 mph (130 km/h) with a higher gust.

Some strengthening is possible today and Isaias is expected to remain a hurricane for the next few days.

A dangerous storm surge will raise water levels by as much as three to five feet above normal tide levels in areas of onshore in the Bahamas.

Bahamians urged to heed all warnings and prepare for Hurricane Isaias

Preparing for the hurricane season during COVID-19