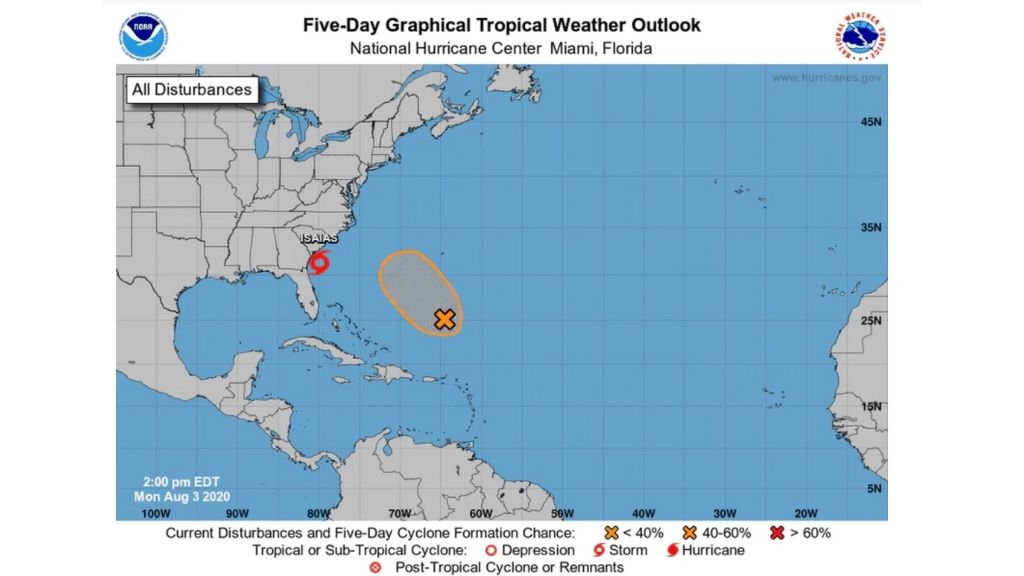 As eastern communities prepare for Tropical Storm Isaias’ impact, the National Hurricane Center has been monitoring an area of low pressure that may develop into a tropical cyclone, a rotating storm system that could strengthen into a tropical storm or hurricane.

In its 2 pm report, the National Hurricane Center said that a surface trough of low pressure located a few hundred miles off the northern Leeward Islands is producing disorganized showers and thunderstorms. If the trough does become a tropical storm it will be named Josephine.

The system’s is currently projected for the east coast, north of Florida, moving at 15 mph over the southwestern Atlantic Monday and Tuesday and is expected to stall southwest of Bermuda in the latter part of the week.

Tropical Depression No. 10, a system off the African coast was reported on Friday night but then dissipated by Saturday.

In July, there were five tropical storms: Edouard, Fay, Gonzalo, Hanna and Isias. Other named storms this year have included Arthur, Bertha, Cristobal and Dolly.

Isaias and Hanna have been the two hurricanes thus far of what is predicted an above-normal hurricane season with an estimated 13 to 19 named storms, as well as six to 10 hurricanes and three to six major hurricanes.

Isaias strengthens slightly as it crawls up Florida coast

Gonzalo downgraded to a Tropical Depression