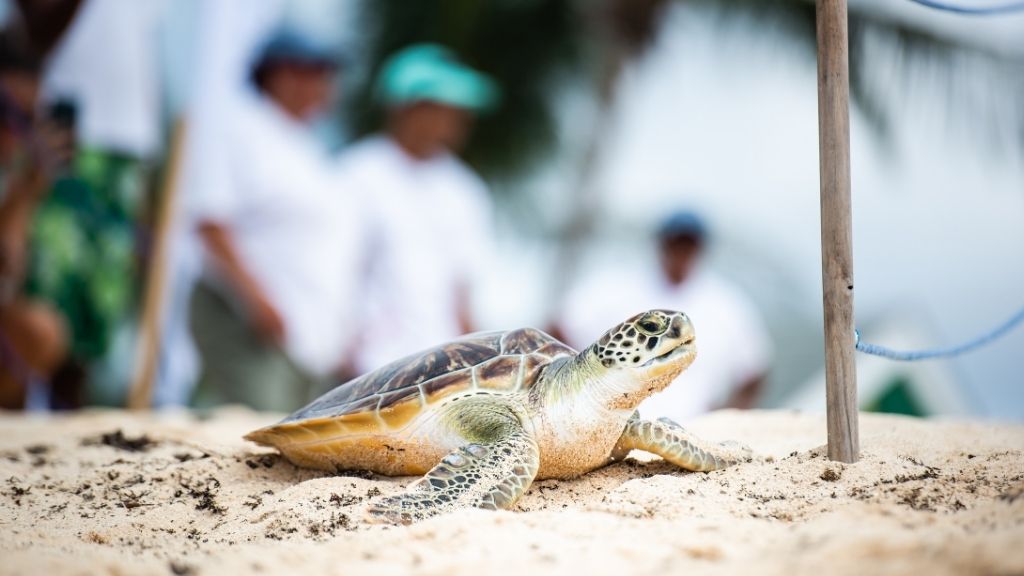 Cayman Turtle Conservation and Education Centre has announced the close of a very successful nesting season, with a total of 433 nests laid by the females of the Centre’s Breeding Pond.

“This is great news for the Centre’s conservation programmes,” said Mr. Tim Adam, Chief Executive Officer, Cayman Turtle Centre. “We are proud to report that despite the challenges of the COVID-19 pandemic, we have still been able to release 1,361 hatchlings as well as 66 head-started Green sea turtles into the wild this year, significantly boosting the wild sea turtle population.”

In addition, many more ‘head-started’ turtles are currently being raised at the Centre, under the expert care of the in-house veterinary team. They will be released when they are between one and two years old, an age when they have a better chance of survival to adulthood in the wild.

All the eggs laid at the Centre come from 231 mature female turtles in the Green’s Breeding Pond, which is at the heart of all the Centre’s turtle release programmes. It is these eggs, and resulting hatchlings, which are responsible for increasing the local wild turtle population. Wild nests have grown from the 23 nests counted during the Department of Environment’s first survey in the 1999 season to over 500 in their survey this year to date. An independent scientific study has also shown conclusively that that nine out of ten wild Green sea turtles nesting on Cayman beaches are related to captive-bred and reared Green sea turtles released from the Centre in previous years.

The eggs laid at the Breeding Pond beach are collected and taken to the Centre’s Hatchery, where, from the beginning of May, and allowing for the 60 days incubation period, visitors have the privilege of seeing  the baby turtles hatch out of their eggs, and slowly climb up through to the top of a long column of sand in a special demonstration nest box equipped with a glass viewing window.

This year, the first female to make her way, after sunset, up onto the Turtle Centre’s artificial beach at the edge of the Breeding Pond, made her nest on March 3, which is earlier than normal. The Green sea turtle breeding season usually begins in mid-April.

“The last nest laid on the August 28 marked the end of the 2020 turtle nesting season” Dr. Walter Mustin, Chief Research & Conservation Officer, Cayman Turtle Centre, said. “Our guests will again have the unique opportunity to witness the eggs, demonstration nests, and hatchlings when nesting resumes from April 2021 onwards.”

Although the spectacle of the hatchlings making their way up through the sand is over until next season, the park has plenty of other animals to see and encounter, from the turtles in the Breeding Pond and Touch Tanks, as well as Smiley the crocodile, the nurse sharks, barracudas and tarpon of Predator Reef, butterflies in the Butterfly Garden, and the colourful birds of the Caribbean Free-Flight Aviary.

In addition to the release of head-started turtles, the Centre has expanded its release programme in recent years to include “jump-started” releases of two-day-old hatchlings directly into clumps of floating sargassum seaweed out at sea, with the help of local dive operator, Cayman Turtle Divers. This helps the hatchlings avoid the predators and dangers associated with entering the water from the beach, and the shallow water of the shoreline. The baby turtles naturally look to make their home in these floating clumps of seaweed for the first year or so of their life, because they offer the turtles protection and a source of food.

There have also been three nest translocations this year. These were where eggs, near to their hatch date, were carefully transplanted by the Turtle Centre’s veterinary team, into sandy nests along Seven Mile Beach so they may hatch in a natural environment and make their own way into the Caribbean Sea.