Two tropical systems forming; Cayman to get 1-2 inches this weekend 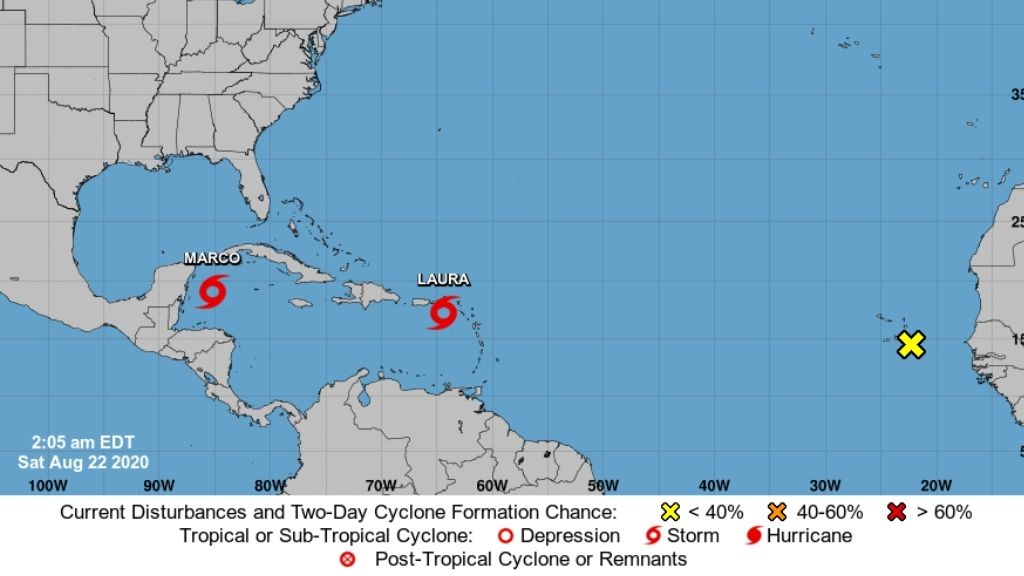 Residents along the Gulf Coast are preparing for two tropical systems to make landfall next week. Some meteorologists are predicting that both Tropical Storm Marco and Tropical Storm Laura will increase to hurricane strength by next week-- this would be the first time in recorded history that two hurricanes would be churning in the Gulf of Mexico at the same time.

“Laura’s track could also be influenced by Tropical Storm Marco, which is also forecast to be over the Gulf of Mexico, however the details of that interaction are highly uncertain at this time,” the NHC said.

Tropical Storm Laura is the earliest ‘L’ storm ever.

At 2 am on Saturday, Laura was moving west-northwest at 18 mph about 40 miles south-east of St. Croix, with maximum sustained winds of 45 mph.

On the forecast track, the center of Laura will move near or over portions of the Virgin Islands during the next several hours, near or over Puerto Rico later today, and near the northern coast of Hispaniola tonight and and early Sunday.

Laura is expected to produce 3 to 6 inches of rain over Puerto Rico and the Virgin Islands, the Dominican Republic, the southern Haitian Peninsula and eastern Cuba through Sunday. Maximum amounts up to 8 inches are possible along eastern portions and the southern slopes of Puerto Rico, as well as over Haiti, the Dominican Republic and eastern Cuba. This heavy rainfall could lead to flash and urban flooding, as well as an increased potential for mudslides with minor river flooding in Puerto Rico. 1 to 3 inches of rain with isolated maximum totals of 5 inches is expected over the northern Leeward Islands, the Turks and Caicos and southeast Bahamas.

At 2 am, the center of Tropical Storm Marco was moving toward the north-northwest near 13 mph about 150 miles from Cozumel, Mexico with maximum sustained winds of 40 mph.

Maximum sustained winds are near 40 mph with higher gusts. Additional strengthening is forecast during the next couple of days as the system approaches the Yucatan peninsula and Marco could be near hurricane strength when it moves over the central Gulf of Mexico on Sunday. Tropical-storm-force winds extend outward up to 70 miles from the center.

Marco is expected to produce the following rainfall accumulations through Sunday: Eastern portions of the Mexican states of Quintana Roo and Yucatan: 3 to 6 inches, isolated maximum totals of 10 inches. This rainfall may result in areas of flash flooding. Northeast Nicaragua and the Cayman Islands: 1 to 2 inches.