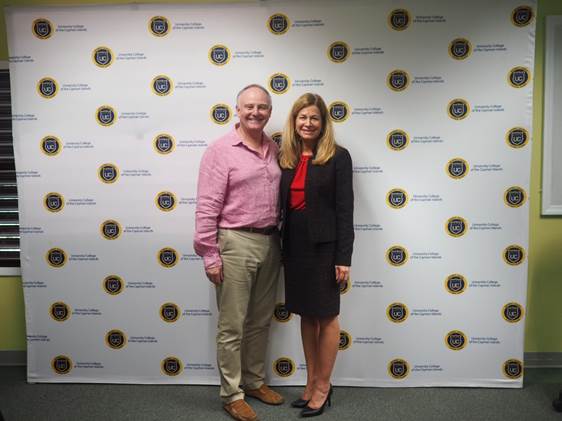 The University College of the Cayman Islands (UCCI) is excited to announce a dynamic new speaker series for 2020 to be held on campus. The Speaker Series will convene local and international leaders to discuss compelling topics and distill lessons in leadership.

On December 17, 2019, the new series launched with retired Major-General David Fraser, CMM, MSC, MSM, CD, who is one of the most decorated generals in Canadian Armed Forces history.

During the inaugural session of the series, Major-General David Fraser discussed his experience in the Canadian Armed Forces and his time within NATO. He highlighted critical lessons around humanitarian aid and relief support during times of conflict, nation-building, and how to deal with complexity and failure.

"The most important thing is building relationships, people are an institution's greatest asset, and they matter first in every decision, once we understand that anything is possible. Always extend your trust and communicate your intent so that your team can achieve the greatest results in complex situations," said Major-General David Fraser.

He further explores this dialogue in his book on NATO's first combat operation in Afghanistan, Operation Medusa: The Furious Battle that Saved Afghanistan from the Taliban, co-authored by Brian Hanington. Those who attended the luncheon had the opportunity to receive a signed copy.

President & CEO, Dr Stacy McAfee, spoke to the launch of the speaker series stating: "Beginning this series with Major-General David Fraser is a demonstration of UCCI's commitment to expanding education beyond the classroom. The Speaker Series will aim to connect our community with local and international thought leaders, trendsetters, and history-makers shaping social change."

This UCCI speaker series will continue throughout 2020 and will feature notable speakers that educate, enlighten, and entertain the community on a variety of topics.

Information on future speakers on campus can be found on UCCI's website at ucci.edu.ky or call 623-8224.