UN report: Increased warming closing in on agreed upon limit 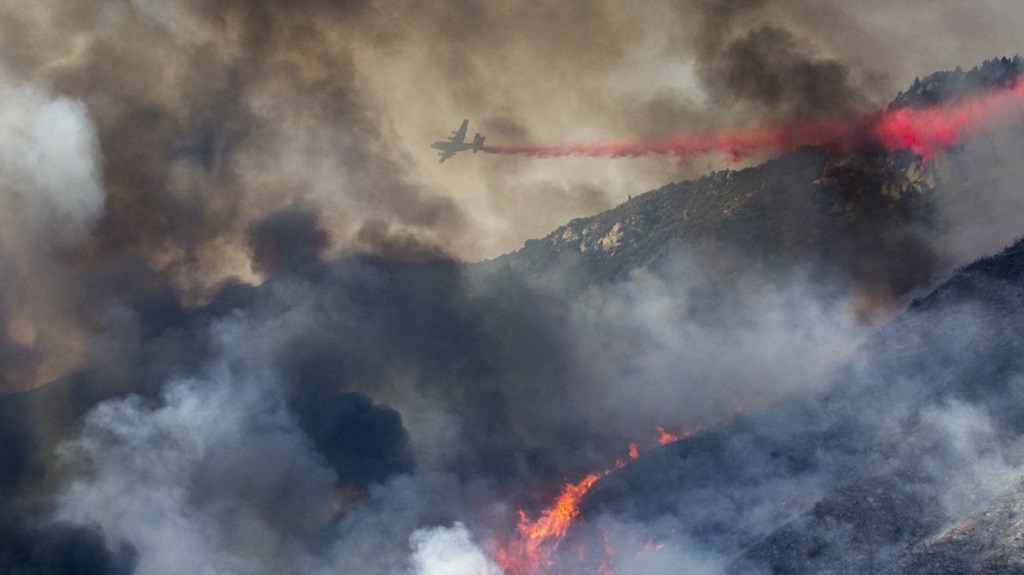 FILE - In this Saturday, Sept. 5, 2020 file photo, an air tanker drops fire retardant on a hillside wildfire in Yucaipa, Calif. A hotter world is getting closer to passing a temperature limit set by global leaders five years ago and may exceed it in the next decade or so, according to a new United Nations report released on Wednesday, Sept. 9, 2020. (AP Photo/Ringo H.W. Chiu)

The world is getting closer to passing a temperature limit set by global leaders five years ago and may exceed it in the next decade or so, according to a new United Nations report.

In the next five years, the world has nearly a 1-in-4 chance of experiencing a year that's hot enough to put the global temperature at 2.7 degrees (1.5 degrees Celsius) above pre-industrial times, according to a new science update released Wednesday by the UN, World Meteorological Organization and other global science groups. (Video: More than 14,000 firefighters are battling fires from the Sierra National Forest to San Diego. Helicopters were used to rescue hundreds of people trapped in the Sierra National Forest, while in the south, people in a half-dozen foothill communities east of Los Angeles are being told to stay alert because of a fire in the Angeles National Forest. Video credit: KFSN, ASSOCIATED PRESS, KTVL, KPTV, SEATTLE HELICOPTER SHARE)

That 1.5 degrees Celsius is the more stringent of two limits set in 2015 by world leaders in the Paris climate change agreement.

A 2018 UN science report said a world hotter than that still survives, but chances of dangerous problems increase tremendously.

The report comes on the heels of a weekend of weather gone wild around the US: Scorching heat, record California wildfires and two more Atlantic storms that set records for earliest 16th and 17th named storms.

The warming that has already occurred has "increased the odds of extreme events that are unprecedented in our historical experience," Stanford University climate scientist Noah Diffenbaugh said.

For example, historical global warming has increased the odds of record-setting hot extremes at more than 80 per cent of the globe, and has "doubled or even tripled the odds over the region of California and the western US that has experienced record-setting heat in recent weeks," Diffenbaugh added.

The world already has warmed nearly two degrees (1.1 degrees Celsius) since the late 1800s, and the last five years are hotter than the previous five years, the report said. The speed-up could be temporary, or it might not be.

"The probability of 1.5 degrees (Celsius) is growing year by year," Taalas told The Associated Press. "It's very likely to happen in the next decade if we don't change our behavior."

Breakthrough Institute climate scientist Zeke Hausfather, who wasn't part of the new report, said the document was a good update of what scientists already know.

It is "abundantly clear that rapid climate change is continuing and the world is far from on track" toward meeting the Paris climate goals, he said.

Some countries, including the US and many in Europe, are reducing emissions of heat-trapping carbon dioxide, but Taalas said the world is on a path that will be 5.4 degrees (3 degrees Celsius) warmer compared with the late 19th century.

That would be above the Paris accord's less stringent two-degree Celsius target.

The latest report was the UN's annual update on "climate disruption" caused by the burning of coal, oil and gas. It highlighted more than just increasing temperatures and rising sea levels.

The report spotlights unprecedented wildfires in the Amazon, the Arctic and Australia. California is fighting record wildfires as the report was issued.

"Drought and heat waves substantially increased the risk of wildfires," the report said. "The three largest economic losses on record from wildfires have all occurred in the last four years."

Carbon dioxide emissions will be down four per cent to seven per cent this year because of reduced travel and industrial activities during the coronavirus pandemic, but the heat-trapping gas stays in the air for a century so the levels in the atmosphere continue to go up, Taalas said.

And, he said, so will the warming.

So far, this year is the second hottest on record and has a 37 per cent chance of surpassing the global record set in 2016, according to the US National Oceanic and Atmospheric Administration.

UN: Discussions with Russia on COVID-19 vaccine under way

UN: Pandemic could push tens of millions into chronic hunger