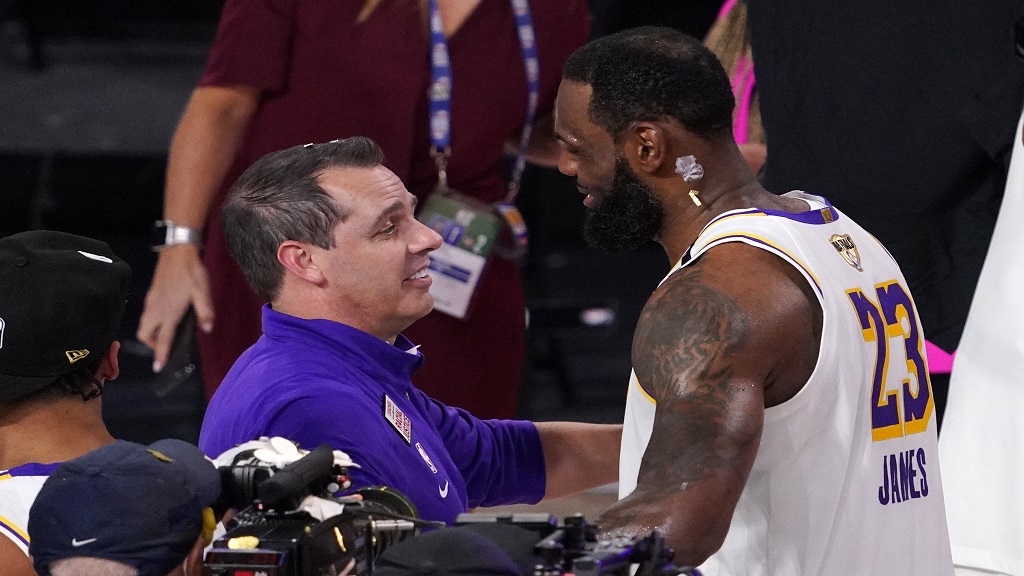 Frank Vogel hailed LeBron James as "the greatest player the basketball universe has ever seen" after he inspired the Los Angeles Lakers to end their NBA title drought.

James claimed a triple-double of 28 points, 14 rebounds and 10 assists as the Lakers cruised to a 106-93 Game 6 victory on Sunday to become NBA champions for the first time in a decade.

The legendary James was named NBA Finals MVP for the fourth time and became the first player to land that award for three different franchises.

James is now a four-time NBA champion and Lakers head coach Vogel ranks the 35-year-old as the best player of all time.

Asked about his decision to take the job in May 2019, when there was perceived to be uncertainty around the Lakers, Vogel said: "Well, there's not uncertainty in my mind with LeBron James.

"And [when] I took the job, we didn't have Anthony Davis. We didn't have the whole team. It was a different team after the fact.

"It's just been a remarkable experience coaching him and seeing him take this group that was not in the playoffs last year, the roster was put together overnight, and just taking a group and leading us to the promised land, so they say.

"He was terrific the entire season leading us, and I can't say enough about him."

Vogel paid tribute to the mental strength shown by his players since they entered the bubble at Walt Disney World in Orlando.

He said: "Yeah, I've always believed in our mental toughness, and our experience. Not just LeBron, I believe Anthony Davis was destined to be a champion, and the pairing of the two of them together took us here.

"But the experience of the group, the IQ of the group, [Rajon] Rondo, Danny Green, JaVale McGee having been there, the talent level of the other guys, other guys willing to buy into starring in their roles.

"Just we had a strong belief in this group. When we got into the bubble, it was about focusing on the work, staying in the moment, focusing on day to day, and after one point - I don't know if there was really one point.

"I think beating Portland was a huge confidence booster for us because they were playing as well as anybody in the world. We know what Dame Lillard is capable of, and it just built from each series."