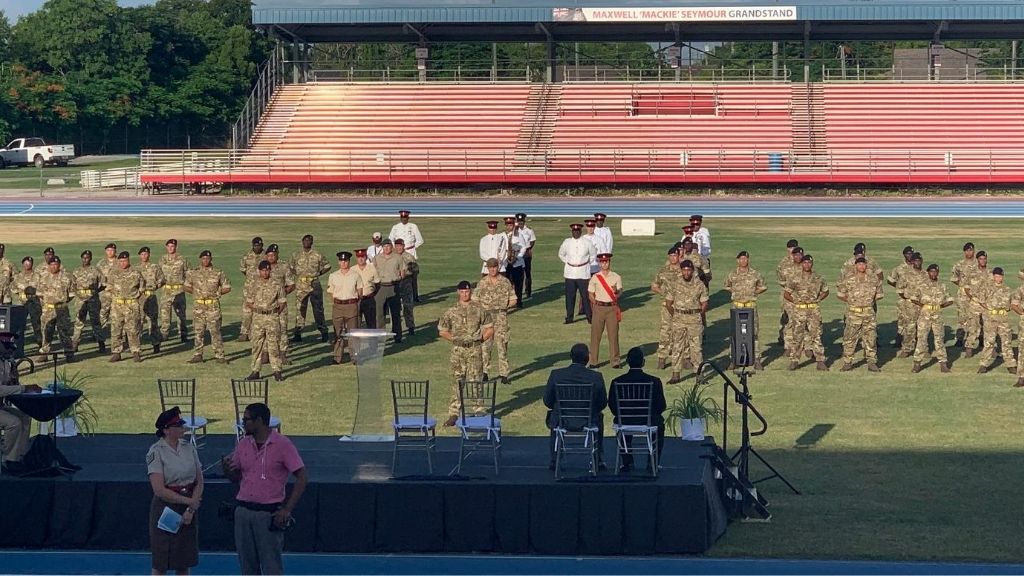 “This is rather odd for me to be making a speech with the audience behind me,” said Premier Alden McLaughlin on Sunday as he addressed the new Cayman Islands regiment at their first ever passing out parade.

With a large crowd behind him at the Truman Bodden Sports Complex, the premier revealed that he had “thought of this moment for over 16-years now,” referring to a dream that was born after Hurricane Ivan, when government put the idea before the United Kingdom, but were turned down. The idea was not resurrected until last year when Mark Lancaster who was the Minister of State for the Armed Forces in the UK at the time, visited Grand Cayman.

The premier indicated further that the country should be grateful for the passion of the governor, Martyn Roper.

Mr Roper who also addressed the crowd, confirmed that there was no country that had ever established a regiment so quickly, particularly in the context of a global pandemic and thanked the premier for his “steadfast support” to get the regiment to where they are today.

“We can see the tangible signs of that support before us today,” said the governor.

"We announced only 10-months ago that we were going to form this regiment, and despite the pandemic, we are here,” confirmed the premier.

“Despite your rank each of you has a role to play in the success of this regiment,” he told the recruits.

“The UK’s only interest is to support Cayman and the region,” said the governor.

“I hope that each of you will wear your badge with enormous pride,” said the governor after which he inspected the Alpha Troupers. The governor also presented the award to the best international student, Halston Farley, by the Royal Military Academy at Sandhurst in the UK.

The premier inspected the Bravo Troupers, awarding Jared Ebanks with the award of best of the 51 recruits of the Cayman Islands Regiment.

This was the first time that the Cayman Islands Regiment was seen on duty in uniform. The first 51 reserves, the senior management team and the five Lieutenants recently commissioned at the Royal Military Academy Sandhurst took part in the parade as well as members of the UK MOD training team who flew to Cayman to train the new recruits.