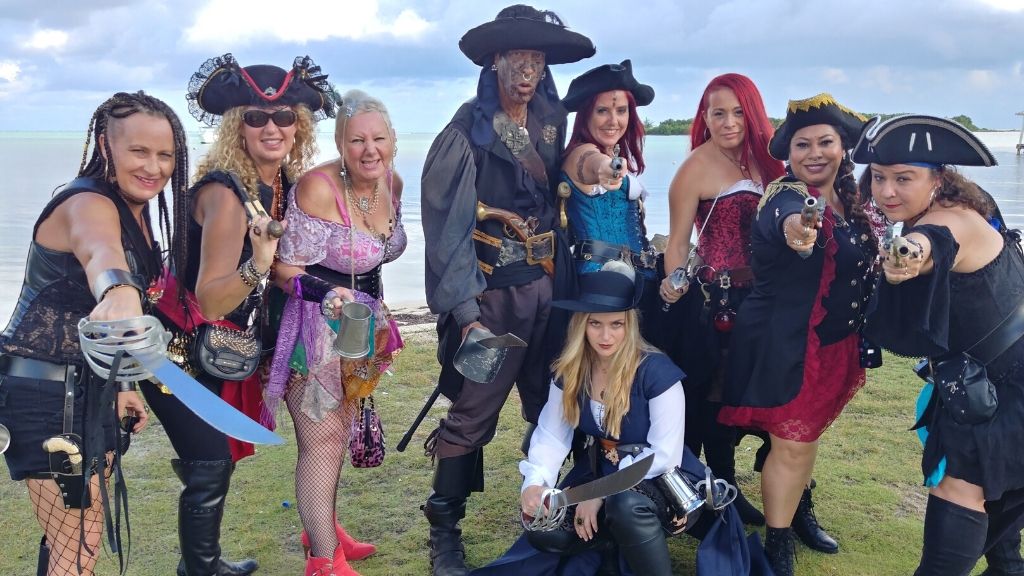 While small in size and population, Little Cayman rallied with all its might to create their best Pirates Week weekend to date.

Running from November 15 to 17, celebrations included a kick-off party and fireworks at McCoy’s, the Little Cayman Float Parade, a costume contest, closing party with fireworks, and Pirate Farewell Lunch.

Akin to an old fashion barn raising, the entire community came together to work and celebrate. This effort was felt most strongly during Saturday’s Float Parade. The parade started at Head ‘O’ Bay and wound its way down Guy Bank’s Road into Blossom Village.

Old, young, and four legged pirates strutted while a music truck pumped soca into the air inviting all to dance.

Olivia Benjamin, who attended the parade in Little Cayman for the first time shared: "This is my first Little Cayman Pirates Week. I’m having a blast and would definitely come back!”

The floats were full of creativity and ingenuity making the most of resources available. Little Cayman Education Services (the local school) created a float with a strong message about marine plastic. Little Cayman Reef Resort retrofitted a bell cart for their float.

Political statements were made with “HMS Brexit” and the creativity continued with the show stopping ‘Genovesa’. Guests at Paradise Villas, Little Cayman Beach Resort, Southern Cross Club, those renting houses, and locals all cheered as the floats and pirates passed by.

Rolling into the Hungry Iguana parking lot, the parade ended with a tail gate of sorts where pirates voted on their favourite costume, shared drinks, and enjoyed each others company. Costumes ranged from modest to extravagant, with each taking their own interpretation.

Many stayed to enjoy fireworks and grab dinner at Hungry Iguana, which transformed into a club at 9 pm. The lights were dimmed, a DJ spun tunes and the community danced the night away under the stars.

Hannah is a regular at Little Cayman’s Pirates Week. When asked what brings her back year after year she said “Though we be scallywags and swashbucklers we always feel welcome on Little Cayman and know that after a hard day’s pillaging there is good food, grog, and company”.

All are welcome to enjoy Pirates Week on Little Cayman. To take part, book accommodation early as stock is limited, pack a costume, and book a flight over.  We recommend that you make the most of the trip and stay a few extra days to enjoy the island’s tranquility, once the pirates leave, or jump into the world class diving.

The sun, the breeze, and the sea just feel better on the smallest and most serene of the Cayman Islands and Pirates Week on Little Cayman carried that special magic, breathing life into the by-gone days of pirates.