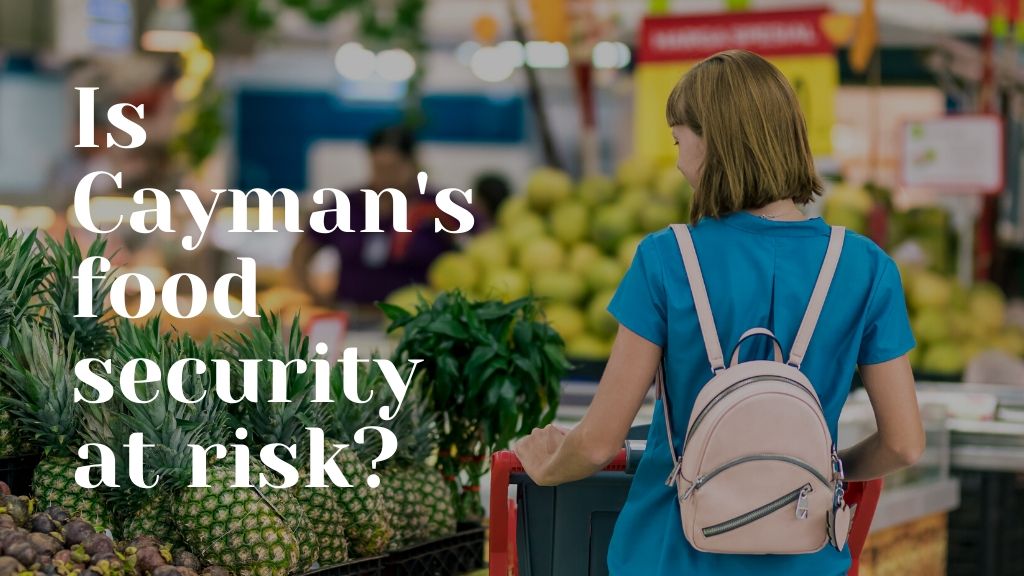 The Cayman Islands currently imports almost all of the food that it consumes. According to the most recent reports from the Economics and Statistics Office, during the first 9-months of 2019, food and live animal imports totalled $142.2 million. Food and Beverage imports grew by 7 per cent during this period, primarily due to the increase in processed food for household consumption, which grew by 7.8 per cent. Almost all of Cayman’s food imports are for household use. This is important to note, given the shut down of the tourism sector.

During the third quarter of 2019, Cayman recorded increases in imports of vegetables and fruit of 16.8 per cent and meat and meat preparations by 13.4 per cent. Imports of fish (not marine mammals), crustaceans, molluscs and aquatic invertebrates and coffee, tea, cocoa, spices, and manufactures had sizeable increases of 22.9 per cent and 24.9 per cent, respectively.

At the coronavirus press briefing of April 2, when asked about food security, Premier Alden McLaughlin confirmed that supply lines remain open. The monthly schedule of the Port Authority would confirm this. The Premier also indicated that if US exports ceased or US ports closed, that he was assured by local supermarkets that they would turn to suppliers in South America.

While the port of the Cayman Islands is open to receive cargo, and the Premier’s assertions are all accurate, there are some important facts around imports and our food security that Caymanians, and indeed the entire Caribbean, need to reflect on, within the context of the current crisis.

First of all, as most readers are aware, the United States is the Cayman Islands’ primary trading partner. Much of our trade with the United States is driven by imports of food items such as vegetables. Cayman’s imports from the United States surged by 18.3 per cent during the first 9-months of 2019. There are currently no Caymanian food import arrangements with South American suppliers of any sizeable amount.

In an article that I wrote in Forbes, dated March 30, I explained that over time, due to the current pandemic “output from the United States is likely to be impacted by the temporary closure of various food operations as well as the shortage of labour in all areas of the supply chain including production, inputs, transportation, processing and shipping. In harvesting, for example, it is predicted that there will be fewer seasonal field workers. Within the upcoming weeks and months, as key fruits and vegetables come into season, short ripening times and perishability will be compounded by reduced labour.”

Further to this, due to reduced output as well as other COVID-19 impacts that are affecting global supply chains and supermarket stocks, many countries might begin to close borders or at lease restrict exports. According to Pamela Coke-Hamilton, Director of International Trade and Commodities at UNCTAD, “As workforce constraints cause a contraction in internal production, panic buyers empty supermarket shelves and import partners conserve their own food supplies, some states could reduce or temporarily discontinue food exports so as to preserve their own food security.” This also holds for countries outside the United States, including Latin America and Europe, where many exports have already been restricted so as to preserve domestic supply.

Not to be forgotten are food security issues that are magnified around hurricane time, making the Cayman Islands even more vulnerable in the upcoming months.

Depending on how long the coronavirus pandemic lasts, Cayman might be looking at the this crisis coinciding with hurricane season. Loop News has reported that "an above-normal hurricane season is expected this year with four to 18 tropical storms of which seven to nine are forecasted to become hurricanes. According to Meteorologists at AccuWeather, two to four of these hurricanes are predicted to strengthen into major storms."

A viable solution holds in intraregional trading arrangements. Caribbean Airlines came out today with a press release indicating that it would be transporting barrels between some of the countries to which it flies. Cayman was not on this list but perhaps such an arrangement could be pursued.

According to Zachary Harding, Group CEO of SSL Growth Equity Limited (SSL Group) and Board Director of Caribbean Airlines Ltd. “Now is the time for breakthrough regional leadership to tear down the barriers and expedite inter-island food trade in order to achieve some semblance of food security for our people. Caribbean Airlines and LIAT must work together to create an efficient food cargo network. What some countries need, others have in excess, and vice versa."

Please note that this article seeks to clarify the new order of trade in the world and is not a call for panic buying. It is clear that trade lines currently remain open. Cayman is also lucky that its port workers appear to be out in full force. On a post on the Port Authority’s web site, dated March 27, Joseph Woods Acting Port Director indicated his gratitude to the many “committed staff who work around the clock to ensure there is an uninterrupted flow of cargo into the Cayman Islands and who provide our customers with exceptional customer service! It is because of that cohesiveness that the flow of cargo and fuel continues unhindered into the Cayman Islands.”

He continued, “All cargo vessels are arriving as per their regular schedule and are being discharged as normal.  The large importers are able to collect their containers the same night as they arrive and should there be too many for them to collect during the night time, PACI’s hardworking staff is there to provide the same exceptional service during the daytime as well.  I, therefore, would like to salute and thank the hardworking team of PACI.”

If there is a message that comes through here, it is that Cayman must at this time seek to support local farmers as much as possible. Residents and business must make conscious decisions to source locally and consume foods from known-sources. Cayman has around 300 local farmers and two regular farmer’s markets where they sell their produce. Let us be #caymanstrong and support our own.