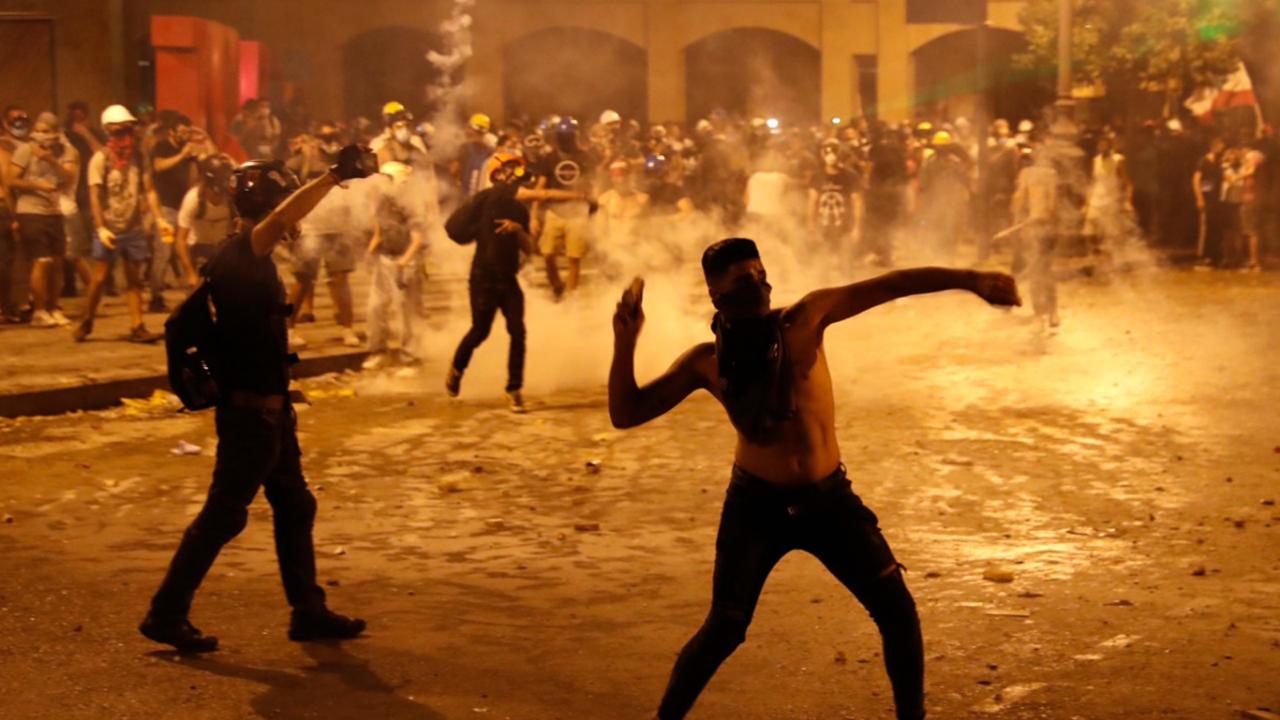 World leaders and international organizations pledged nearly $300 million in emergency humanitarian aid to Beirut in the wake of the devastating explosion but warned on Sunday that no money for rebuilding the capital will be made available until Lebanese authorities commit themselves to the political and economic reforms demanded by the people.

Over 30 participants to the international conference offered help for a “credible and independent” investigation into the Aug. 4 Beirut explosion, another key demand of the Lebanese crowds who took to the streets Saturday and Sunday.

In Beirut, two Lebanese Cabinet ministers, including a top aid to the premier, resigned amid signals that the embattled government may be unravelling in the aftermath of the devastating blast that ripped through the capital. The blast killed 160 and wounded 6,000, raising public anger to new levels.

The resignation of Information Minister Manal Abdel-Samad, in which she cited failure to meet the people's aspirations and last week's blast, was followed by a swirl of reports that other ministers were also resigning.
Late Sunday, Environment Minister Demanios Kattar resigned, calling the ruling system “flaccid and sterile.”

He stepped down despite closed-door meetings into the evening and a flurry of phone calls between Prime Minister Hassan Diab and several ministers following Abdel-Samad's announcement. The political haggling had appeared to put off more resignations, and a Cabinet meeting is planned Monday.

If seven of the 20 ministers resign, the Cabinet would effectively have to step down and remain in place as a caretaker government.
Maha Yahya, the director of the Beirut-based Carnegie Middle East Center, said the discussions clearly point to backroom deals that seek to put together a new government that's acceptable to domestic and international powers, as well as the angered public.

The current government “really has been a lame duck,” she said, unable to undertake any reform or show independence in a highly divisive political atmosphere. “Even the ministers are deserting the sinking ship.”
Meanwhile, four more lawmakers announced Sunday they were resigning from the 128-seat parliament, joining four others who declared it earlier. Parliament is also due to convene later this week.

As the political negotiations took place, protesters converged again on the parliament area Sunday afternoon, setting off another night of violent demonstrations. Hundreds of protesters clashed with security forces, attempting to breach the heavily-guarded parliament. Security forces responded with tear gas and chased the protesters in the streets of downtown, in a smaller repeat of scenes from the night before.

The protesters blame the ruling elite for the chronic mismanagement and corruption that is believed to be behind the explosion in a Beirut Port warehouse. Hundreds of tons of highly explosive material were stored in the waterfront hangar, and the blast sent a shock wave that defaced the coastline of Beirut — destroying hundreds of buildings.

The final statement from participants at Sunday's donor conference co-organized by France and the United Nations read: “In these horrendous times, Lebanon is not alone."

The teleconference participants promised emergency aid — focusing on medicine and hospitals, schools, food and housing.
The donors pledged the aid will be coordinated by the U.N. and delivered directly to the Lebanese people — in a clear indication that no money is going to the government and its coffers.

French President Emmanuel Macron, whose country once governed Lebanon as a protectorate, said, “We have to do everything we can so that violence and chaos do not win the day."

“The explosion of August 4 was like a thunderbolt. It’s time to wake up and take action. The Lebanese authorities now have to put in place ... political and economic reforms.”

Demonstrators held signs that read “resign or hang.” One police officer was killed and dozens of people were hurt in confrontations that lasted for hours and where security forces used rubber bullets to disperse the crowds.

On Saturday and in a new expression of rage, protesters also fanned out around the city, storming a couple of government ministries and briefly declaring the Foreign Ministry as the headquarters of their movement. In the economy and energy ministries, the protesters ransacked offices and seized public documents claiming they would reveal how corruption has permeated successive governments.

In the country where civil war raged for 15 years, few, if any, have been held accountable for it and most of the warlords remain in power or leading powerful political factions.

On Sunday, France’s ambassador to Lebanon said his country is taking part in the investigation of the Aug. 4 blast. Bruno Foucher tweeted that 46 officers are operating as part of the judicial investigation. That probe was started by a French prosecutor after a national of France, Jean-Marc Bonfils, was killed in the blast and others injured.

It is “a guarantee of impartiality and speed” in the investigation, Foucher tweeted.

The government, backed by the powerful militant Hezbollah group and its allies, announced it is defaulting on Lebanon's sovereign debt and has since been engaged in difficult, internally divisive talks with the International Monetary Fund for assistance. The coronavirus restrictions deepened the impact of the economic and financial crisis and fueled public anger against the new government. Lebanese have criticized Diab's government for being unable to tackle the challenges, saying it represents the deep-seated political class that has had a hold of the country's politics since the end of the civil war in 1990.

In a televised speech Saturday evening and in an attempt to defuse public anger, Diab offered to propose early parliamentary elections said he was prepared to stay in the post for two months to allow time for politicians to work on structural reforms.